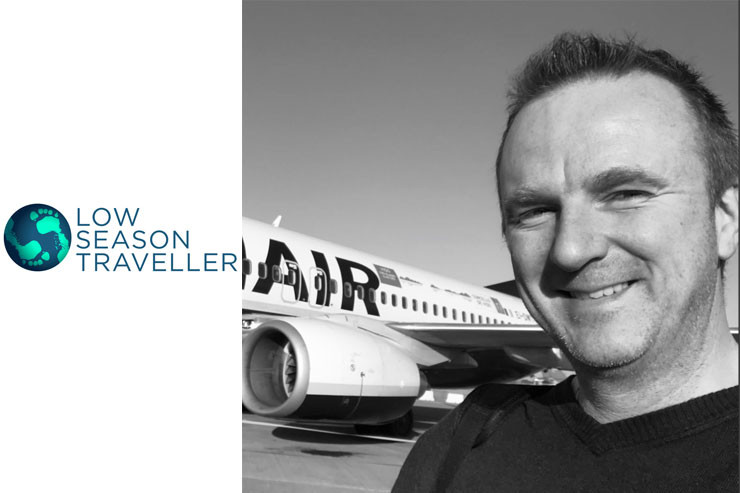 How can a destination suffer from overtourism when it does not understand nor know for certainty, what the ideal number of visitors is for their destination?

Ged Brown, the Founder of Low Season Traveller since 2018, talks to TravelDailyNews Asia-Pacific about overtourism and carrying capacity. Ged has over 20 years of experience of working at a strategic level in the global travel and tourism industry having held senior management positions at Thomas Cook, MyTravel, TUI and Kuoni. He more recently sat on the senior management board at UBM Routes for 10 years, during which time he pioneered and promoted the role of tourism authorities in the air service development process as well as managing the host city selection process for all events. A self-confessed travel addict, Ged frequently presents at several travel industry events throughout the year and regularly writes articles and publications on the industry.  He hates crowds.

TravelDailyNews: Tourism Authorities and Tourism Boards around the world always looking to increase the numbers of tourism they receive and very few talk about the carrying capacity. Which are the trends and consequences of such policies?

Ged Brown: Interestingly, we just discussed this last week on the Low Season Traveller Podcast with Dr David Ermen. In our experience, most destinations don't understand what their true capacity is.  They may know the number of beds they have in both hotels and in some cases on platforms such as AirBNB, but they don't understand what their maximum number of guests per day is in order to maintain both a decent living environment for their citizens as well as a decent tourism experience for visitors.  No minister for tourism wants to be at the helm when visitor numbers decrease as we tend to have this insane KPI mentality which drives a "more is better" approach.  Many recent studies have shown that the closer a hotel gets to its capacity, then the lower the service levels become (as resources are stretched) and the guest experience diminishes which is evident from post-stay questionnaires.  This is exactly the same principle with our tourism destinations and is part of the reason why so-called "overtourism" is so evident.  The word "overtourism" is an entirely inappropriate word for this phenomena.  How can a destination suffer from overtourism when it does not understand nor know for certainty, what the ideal number of visitors is for their destination?  There is no point of reference for most if not all destinations.

TDN: Do you have examples of destinations that already started to feel the negative effects of over-tourism?

G.B.: There are many many examples which have been well publicised recently; Maya Bay in Thailand, Borocay in The Philippines, Venice, Barcelona, Dubrovnik, Reykjavic etc...   In these destinations, authorities are struggling with the tourism influx (which they have allowed and encouraged).  Sadly, like a frog in boiling water, destinations only realise they have a problem with too many tourists when it becomes just too apparent.  The UNWTO predict that we will have a global total of 1.8 billion international tourists by 2030.  They predicted that by 2020 we would have 1.4 billion.  We hit that figure in 2018 two years ahead of time.  As such, the 2030 figure is at least 200m short of where we are headed.  To put that into context. If we travel back in time 1 million seconds, we would be at a point about two weeks ago. If we travelled back 200 million seconds, we would be in 2013!!!  This is a colossal difference and it's increasing every day.  There are a whole raft of destinations around the globe that have too many tourists already but they just haven't reached that tipping point to breakdown of the destination.  Sadly, overtourism is going to be featured more prominently and more often in the coming months and years.

TDN: How can destination calculate their carrying capacity and how they can adapt their tourism policies and superstructures according to that?

G.B.: That's the most important question of all.  The question of measurement.  And it's not an easy one to answer.  There are some great organisations out there who can help with this challenge.  The World Tourism Association for Culture and Heritage was set up to help destinations with this very question. They have the industry's leading researchers on their board and they take a holistic approach to the entire issue.  Marina Novelli, from the University of Brighton is incredibly knowledgeable in this field and has just released a book on this very subject: Overtourism Excesses, Discontents and Measures in Travel and Tourism.
The starting point is having a truly joined-up approach in your destination across all stakeholders.

TDN: What should the public and private sector do to manage tourist flows and fight over-tourism?

G.B.: There are many different ways that both the public and private sector can help out.  As an industry, it's absolutely essential that we try to ease surge tourism by broadening our seasons.  We have always struggled with seasonality but now is absolutely the right time to strike out and address this issue.  We need to pro-actively promote our low seasons and have the confidence that the experience in the lower seasons can in many cases be better than in the high seasons.  Low prices, fewer crowds, more local interaction, more authentic experiences...all things which every piece of travel research today tells us that next gen travellers are all seeking.  If hotels and tour operators are to remain open during the low seasons, then the tourism authorities simply have to put money into promoting these times of the year.  It's a big shift, but if we want to ensure a first class tourism offering, we simply have to change our approach.  And here's the thing; it's going to organically happen anyway; Destinations have the opportunity to get ahead of the curve and lead in terms of low season travel.

TDN: Do you have successful cases of countries that have specific policies to manage tourism flow and minimize the effects of over-tourism?

G.B.: I guess the best example is Bhutan where international arrivals are closely monitored and limited. They grasped the concept very early on and notably, are the only country in the world which measures gross national happiness ahead of GDP!  Another great example is in Amsterdam where they have made real efforts to disperse tourism flows around the city with initiatives like the renaming of Muiderslot Castle to Amsterdam Castle.  It's very close to Amsterdam and with the renaming, more people gravitated towards it (and it is well worth seeing).  Finally, Brussels has done some groundbreaking things in terms of tourism dispersal. They have a new app which shows visitors (like at a theme park), where it is busy right now (to be avoided), where it is quiet right now (so head over there) and where there are more locals than tourists (for those who want more local interaction.  It's a truly ground breaking use of technology and for sure, will be replicated.

G.B.: I set up Low Season Traveller because I have quite a genuine concern for the future of our industry. Having spent over 25 years in the global travel industry, I have had the privilege of experiencing many wonderful destinations which we have available to us.  I believe in the strength of the tourism industry as an economic driver and as a catalyst for peace and understanding across the world.  As such, I want my 2 young daughters to be able to have that experience as they grow up and my fear is that many destinations will take the easy option of increasing prices to reduce numbers.  For me, the best way to experience a destination is during its low seasons when it is more affordable, more authentic, less crowded and at a time when my presence as a tourist is more appreciated.  It's just the right thing to do and it ensures that the hotels and tourism infrastructures we are building, are being used all year round rather than just 5 or 6 months in the peak months - which are the months we have decided are the "best" months to travel.  I want to support tourism authorities who have the courage and foresight to promote their destinations in low seasons and the site which will be launched in November at WTM will be a place where users can learn where it is the low season in any given month as well as learn why it's the low season and why it's actually the best time to visit!