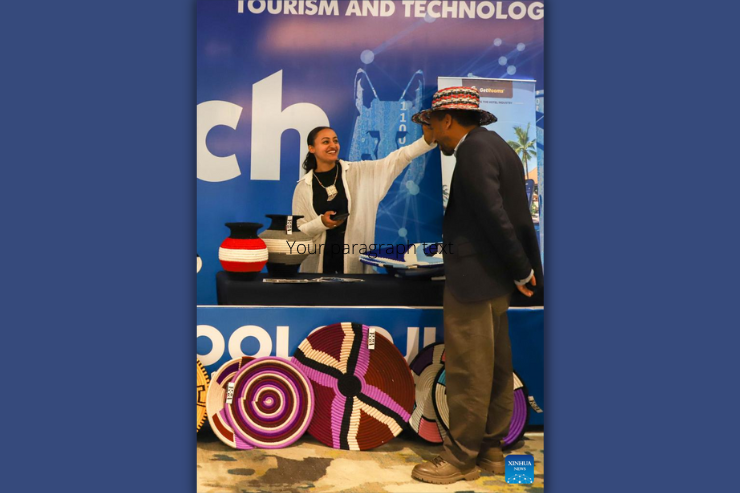 A man visits a stall displaying Ethiopia's traditional handicrafts during the Tourism and Technology Week in Addis Ababa, Ethiopia, on Aug. 10, 2022. (Xinhua/Michael Tewelde)

Oromia Tourism Commissioner Lelise Dhugaa told Xinhua recently that a cross-cultural collaboration between the Oromia region and China is gaining momentum as more Chinese tour operators and interpreters continue to engage in the region's tourism sector.

"We are collaborating with Chinese tour operators and language experts to promote our tourist destinations and attract more Chinese tourists to Ethiopia in particular to the Oromia region," Dhugaa said.

The Oromia Tourism Commission recently launched a website dubbed "Visit Oromia - Google Arts and Culture" to promote the region's most diversified land, cultures, traditions and long history. The website was launched during a Tourism and Technology Week organized by Oromia Tourism Commission that aims to create a policy discussion platform for tourism-related issues and promote the country's tourism destinations using digital technology.

"We are using a digital technology, the first of its kind in Ethiopia, to promote the nation's food, costumes and touristic destinations among others," Dhugaa said.

According to the commissioner, agreements have been reached with the Chinese firms to develop tourism destinations and boost business-to-business relations as part of cementing cooperation in the tourism sector.

"We have a very good partnership with our Chinese brothers and we have also launched Visit Oromia on Chinese social media platforms under the brand 'Land of Origin' aiming at exploiting China's growing tourism market," Dhugaa continued.

Dhugaa assured that Chinese tourists who are visiting the region for the first time would not face any communication barriers as Chinese firms and interpreters will serve them everywhere across the region.

"With its over 1.3 billion population and growing economy, China is becoming a potential tourism market for Ethiopia," she added.

Sileshi Girma, state minister of Tourism in charge of developing tourism destinations in Ethiopia, said his office has identified China, Africa and the Middle East as core markets for tourism development in Ethiopia.

Noting that Ethiopia's rich natural and historical tourist attractions are slightly promoted, Girma said the use of digital technology will be a game changer to promote the nation's unique tourism destinations.

He said the Ethiopian government has established a partnership with its Chinese counterpart to develop the nation's tourism sector and that has given rise to increasing numbers of Chinese people showing interest to visit the country and invest in the tourism and hospitality sector.

"China is becoming a core market. It is no longer a potential market because we have started receiving more clients from China. Hence, we also have Chinese language speaking tour guides and restaurants in Addis Ababa and beyond," Girma said.

The Oromia region of Ethiopia is endowed with several lakes within the Ethiopian Rift Valley including Lake Wonchi which was chosen as the best tourist village of 2021 by the United Nations World Tourism Organization (UNWTO).

The region is also home to various wild animals including mountain nyala which is not only endemic to Ethiopia but has the distinction of being the last large antelope described in Africa, according to information obtained on the commission's website.

The East African country, endowed with natural, historical, and cultural heritages, had recently disclosed its keen intent to boost its partnership with China in the tourism sector as part of a wider 10-year development plan.

According to figures from the Ethiopian government, Ethiopia earned 157 million U.S. dollars from 41,837 Chinese tourists in 2019. The Chinese tourists came to the East African country for a range of purposes including conferences, business trips and seeking leisure.

Over the past few years, Ethiopia's tourism sector has suffered from recurrent conflicts, which were exacerbated by the socioeconomic impacts of the COVID-19 pandemic.

As part of the current national push to attract more Chinese and other foreign tourists, the country last week held the Tourism and Technology Week that envisaged creating a policy discussion platform for tourism-related issues, enhancing networking opportunities for tourism digital champions and innovators, as well as bringing together partners in the tourism sector.

Experts and policymakers attending the Tourism and Technology Week have called for concerted efforts to harness Ethiopia's untapped potential in the tourism sector.

According to the organizers, with the advent of technological advancements and rapid digitalization, all travel companies have shunned geographical barriers and are adopting online methods to approach their clients.

Lack of finance, high training costs, the rapid pace of technological change, and the cost of high-speed broadband, however, are some major obstacles to further the implementation of digital technology in tourism, they said.