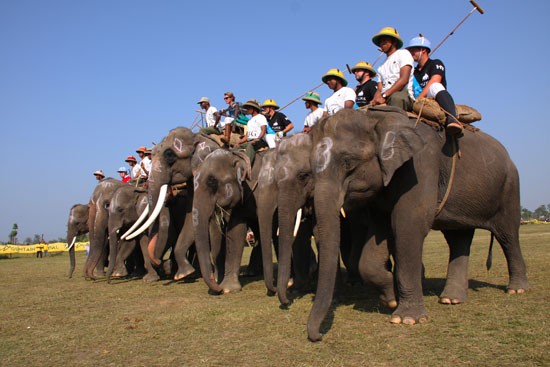 Bangkok — The Thailand Elephant Polo Association isn't seeking permission for a 2019 King's Cup Elephant Polo Tournament and has ceased operations in Thailand, effectively marking the end of elephant polo in the country, after the findings of a PETA Asia exposé horrified sponsors, causing them to withdraw. This development comes after damning video footage released by PETA Asia showed handlers viciously beating elephants at last year's tournament, prompting a global outcry and a dozen companies—including Ecolab, IBM, Angus Energy, Banfi Vintners, and Vespa—to pull their sponsorships of the cruel competition. The video also showed elephants being subjected to other abusive treatment, including being chained in standing water.

"No one with any decency or compassion wants elephants to be beaten bloody and forced to play polo, give rides, or perform stupid tricks," says PETA President Ingrid Newkirk. "PETA is pleased that this abusive spectacle is now history, and we're committed to ensuring that all other animal-exploiting stunts disappear, too."

The footage from PETA Asia's investigation, which was shot from the windows of hotels and apartments near the tournament venue, showed handlers in a holding area next to the polo grounds repeatedly beating and jabbing elephants' heads with bullhooks—weapons resembling a fireplace poker with a sharp metal hook on one end—which they also used to yank the animals by their extremely sensitive ears. Some elephants were beaten until they bled, and one was left chained in water all day.

PETA—whose motto reads, in part, that "animals are not ours to use for entertainment"—points out that elephants used for polo tournaments, rides, or any other type of entertainment endure violent training sessions to force them into submission, during which they're regularly beaten. Between matches, they're often shackled to chains so short that the animals can barely take a single step.