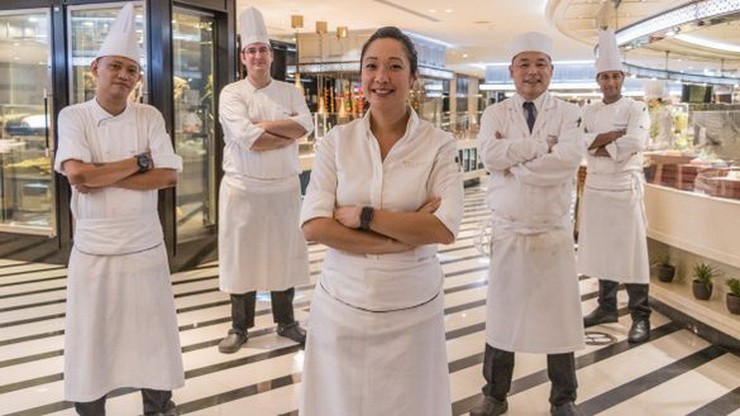 In 2019, Chef Bettina was recognised by the internationally-acclaimed World Gourmet Awards as Chef of the Year.

Philippines - Chef Bettina's culinary journey did not begin like any other aspiring chef's. As a young girl, she was an avid home cook and even dabbled in it entrepreneurially from time to time. However, pursuing this passion cost a bit more than many other college degrees in Manila at the time.

“I didn't actively pursue a formal education in culinary arts because my parents could never afford it. At that time, culinary schools were uncommon in the Philippines and one had to go abroad to pursue it. It was just something that seemed out of reach for me,” shares Chef Bettina Arguelles, Executive Chef of Sofitel Philippine Plaza Manila.

From Manila to Singapore

Graduating with a Communication Arts degree from the Ateneo de Manila University, Chef Bettina worked in advertising before finally making the decision to officially return to her first love, culinary arts.

“When my kids were already in school and we relocated to Singapore, the moon and stars aligned. I found my opportunity to take up the culinary world with its very robust F&B landscape,” she excitedly recalls.

In 2006, Chef Bettina received formal training from the At-Sunrice Global Chef Academy in Singapore and jump-started her culinary career by working at the Fullerton Hotel, Resorts World Sentosa, Privé restaurant under Michelin-starred Chef Wayne Nish, and db Bistro Moderne by world-renowned Chef Daniel Boulud in New York and Marina Bay Sands. The only Filipino expat in the hotel, she was part of the team that opened Sofitel Philippine Plaza Manila's newly-renovated Spiral in 2013 as French Sous Chef and later managed all the other hotel restaurants including Le Bar, Sunset Bar, and Snaps Sports Bar as Restaurant Operations Chef. In 2016, she moved back to Singapore and worked as Chef de Cuisine at Sofitel Singapore Sentosa Resort & Spa.

In 2019, Chef Bettina was recognised by the internationally-acclaimed World Gourmet Awards as Chef of the Year - a remarkable milestone as a Filipina chef and a testament to the sheer talent of Filipinos on the international stage.

Her success story was not without tough challenges that she courageously faced head-on.

“I was a 31-year-old Asian mother-of-two, culinary student/trainee overseas. I was more than a decade older than my peers, came from a third world country, and had an unusual accent. My age and being a mother was a point against me (it was assumed I would be unable to focus or work long hours). I tried so hard, I broke my back trying to prove otherwise. But I have no regrets or grudges. Each of those experiences proved to be the fire that forged my will to succeed and rise above the challenges,” she passionately reflects.

In 2020, Chef Bettina made her comeback at Sofitel Philippine Plaza Manila as its new executive chef — the first-ever Filipina executive chef in a five-star international branded hotel. As she takes the reins of the hotel's award-winning culinary team, Chef Bettina happily shares her inspiring story of following your true passion, breaking glass ceilings, and making a mark in a very competitive industry: “I would like to prove that we don't always have to resort to foreign talent to get the job done and done well. I would like to, albeit in a very small way, open doors for countless other Asian women rocking it in the industry. More than myself, I think I represent something symbolic. I don't want to be considered a novelty, but the start of something great.”

Thriving in the new normal

As Chef Bettina and her team reopened Spiral after seven months of lockdown, it was time to evolve in a pandemic without losing the DNA of the flagship restaurant of Sofitel Manila. The reopening has been successful by continually working on improvements, slowly but surely, despite the limitations and constraints.

Even in these difficult times, Chef Bettina managed to launch one of her proudest projects: developing a Food Truck concept. “As the dawn of New Normal arises, we have to adapt to the new ways people may want to dine. I wanted to harness one of the unique strengths and advantages of the property, which is the huge and spacious outdoor space with a gorgeous view of the bay and sunset. We converted an idle space into a revenue-generating one, boasting a fully repurposed Food Truck Park, the first of its kind in Metro Manila. Not only does this space drive revenue but also great exposure in social media as it is a highly instagrammable location,” shares Chef Bettina.

Some other notable projects that this passionate chef introduced since joining Sofitel Philippine Manila Plaza in June 2020 are the Spiral at Home luxury food-to-go concept and the development of cloud kitchen for online delivery platforms.

“While being the first Filipina executive Chef of an international luxury upscale brand is not in and of itself an accomplishment, I do intend to prove it through my work, paving the way for countless other young girls out there who are aiming to break glass ceilings. You will be remembered by the legacy you leave behind. Not only of who you were, but more importantly, what you've done.” - Chef Bettina Arguelles

Chef Bettina truly believes that what sets people apart are ingenuity, resourcefulness, passion, talent, and resilience to rise above adversity. “I would like to leave behind a legacy here, especially being the first female, the first Filipina to be at the helm, that will last long after I have left. I'd like to inspire my young team to aim high and understand all that it entails to reach your dreams.”

Trying to navigate the rough waters of uncertainty during the pandemic has enabled monumental personal and professional growth, which Chef Bettina is truly grateful for: “My peers and colleagues have been generous in their help, promoting a culture of camaraderie and team work. I like to encourage collaboration and sharing of ideas, which stimulates and empowers the team.”

Being trained by traditional and Michelin-starred chefs built her character, fortitude, discipline and resilience. However, Chef Bettina feels that it also bred fear, stress and unnecessary pain: “I believe motivation and respect is a more powerful tool to drive results rather than fear. I think it is also the mother in me which makes me inclined towards a more nurturing leadership style. I would like to be a modern day leader, who cultivates dreams and aspirations.

I do things that I am passionate about, and give it my all, whether it's being a mother, a wife, a friend, an advocate, or a chef. I always strive for excellence... I am ill at ease with mediocrity. This way even if I fail, I will have no regrets or doubts. This is a life lesson that I share with my daughters, that they can be everything they want to be and be great at everything they do.”

“I would also like to say it's been great to work for a company that promotes gender equality and particularly has a programme that is aimed at getting more women into leadership positions in bars and restaurants. Accor has given me so many opportunities to take on new challenges and has promoted my growth and development.”

Recognising that few women were Executive Chefs across the industry, Accor launched Women in Leadership Disrupting F&B (WILD F&B), a programme to tackle gender inequality in bars and restaurants and promote more women into leadership positions across the group's hotels and support female talent through career guidance, mentoring and leadership forums. Accor also hosts an annual F&B Academy to promote creative ideas in the food and drink scene in its network and women are actively promoted through this programme. In 2019 in Vietnam, Accor hosted the first International Women's Chef event, celebrating 22 women culinary leaders. The group actively seeks women who are looking to build a career in its kitchens and bars and works to promote a culture of diversity and inclusion in the food industry.