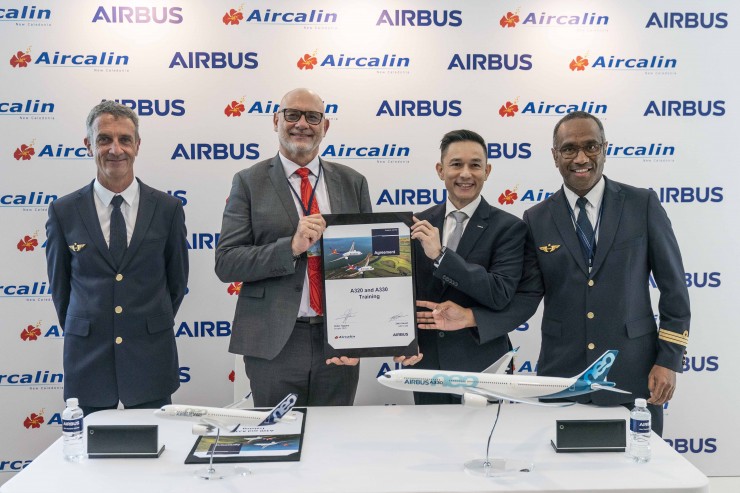 In 1 July, the airline launched a non-stop service between New Caledonia’s capital Noumea and Singapore.

Thailand, Bangkok – New Caledonia’s Aircalin has signed a contract with Airbus Asia Training Centre (AATC) for the provision of flight crew training for its A320 and A330 pilots. Under the agreement, up to 35 pilots from Aircalin could undergo recurrent training on both aircraft types to maintain their skills and qualifications.

As part of the training package, the airline will also be able to undergo Airbus cross crew qualification (CCQ) training that prepares pilots who already hold an A320 type rating to be qualified to fly the A330 aircraft and vice-versa. Aircalin’s fleet comprises one A320neo and two A330neo, with another A320neo on order.

On 1 July, the airline launched a non-stop service between New Caledonia’s capital Noumea and Singapore. The nine-hour flight is operated by the A330neo widebody.

“With regular flights between New Caledonia and Singapore, it was the prime choice for us to pursue a training agreement with AATC. Our pilots will benefit from Airbus’ world-class training services and facilities,” said Didier Tappero, Chief Executive Officer of Aircalin.

“We are extremely proud to welcome Aircalin to the Airbus Asia Training Centre,” said Zakir Hamid, General Manager of AATC. “This agreement is another strong endorsement of the first-class services offered by AATC, meeting airline training requirements closer to their home bases.”

AATC is the largest Airbus-operated flight crew training centre in the company’s global network, with two A320, two A330, one A380 and four A350 simulators. AATC also hosts one ATR 72-600 FFS. AATC is a joint venture owned 55% by Airbus and 45% by Singapore Airlines. At almost 10,000 sqm in size, the facility at Seletar Aerospace Park is part of the Airbus Flight Training Network and serves the Asia-Pacific region and beyond.