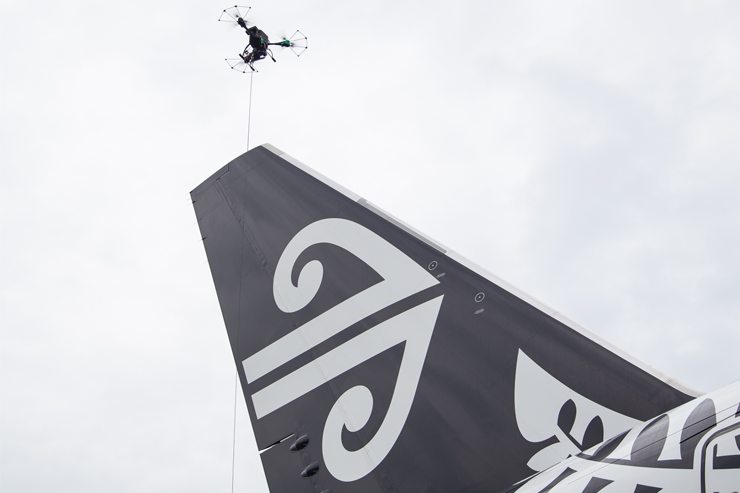 ST Engineering has developed an unmanned drone system, known as DroScan, which sees a drone take a planned route around the outside of an aircraft to inspect its surface and produce high definition images.

Air New Zealand has teamed up with ST Engineering to trial the use of drones to inspect aircraft.

ST Engineering’s Aerospace arm is the world’s largest airframe MRO (maintenance, repair and overhaul) service provider with an extensive global network of facilities in the Americas, Asia Pacific and Europe. The drone inspection trials Air New Zealand is collaborating on with ST Engineering take place at its facility next to Changi Airport in Singapore where Air New Zealand aircraft undergo heavy maintenance checks.

ST Engineering has developed an unmanned drone system, known as DroScan, which sees a drone take a planned route around the outside of an aircraft to inspect its surface and produce high definition images.  These images are processed using a software with smart algorithms to detect and classify defects, which aircraft engineers can review and confirm, or carry out further inspection for defects if required.

“Using a drone to inspect our aircraft will save time, taking around one to two hours, compared to up to six – depending on aircraft type – which means repairs can start sooner if needed, and our aircraft will be able to get back in the air more quickly.

“We’ve trialed using DroScan on a number of our aircraft undergoing maintenance inspections in Singapore now and believe using a drone will also help improve inspection quality.  In future, there may be an opportunity to use the device in New Zealand, for example, to conduct ad hoc inspections after lightning strikes.”

Deputy President of ST Engineering’s Aerospace sector Jeffrey Lam says, “Incorporating innovative technologies into aviation MRO holds great potential in enhancing the way aircraft get serviced.  We are happy to be working with our like-minded partner, Air New Zealand which shares the same motivation and belief as us in exploring the full potential of technologies to improve maintenance work.

“We believe solutions such as DroScan will drive great value for the aviation industry given the huge emphasis it places on safety and efficiency, and we look forward to using it to great effects after we have completed the trials successfully with Air New Zealand.”

Further to the DroScan, Air New Zealand and ST Engineering are collaborating to manufacture a growing number of 3D printed replacement interior parts, and in data analytics to optimise maintenance activities.