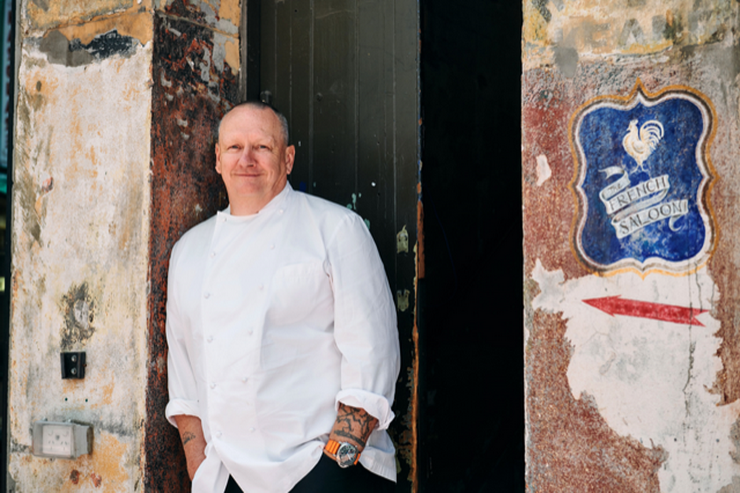 Owner of French Saloon and Kirks Wine Bar and previously consulting for both The Melbourne Racing Club and Craig's Royal Hotel in Ballarat, Ian Curley's food is much-loved for its accessible approach and simple philosophy.

Ovolo Hotels, award-winning boutique designer hotel collection, has announced renowned chef Ian Curley as Group Creative Culinary Partner for Australia. The British-born and Australian-based chef brings a wealth of experience and knowledge as he endured a 25-year tenure in Melbourne where he was at the helm of some of the city's most recognised restaurants. Chef Curley will continue to evolve Ovolo's dining concepts guiding Ovolo's Creative Culinary Consultants and passionate young emerging chefs in shaping the ethos of ethical eating, conscious cuisine, and locally sourced produce across all venues.

Owner of French Saloon and Kirks Wine Bar and previously consulting for both The Melbourne Racing Club and Craig's Royal Hotel in Ballarat, Ian Curley's food is much-loved for its accessible approach and simple philosophy – he cooks the food he loves to eat, across all cuisines. His signature style, however, is European fare of the highest quality, with classic French underpinnings – a legacy from the rigorous training he received early in his career in the kitchens of London.

“It's the best role I could have asked for. Working with and mentoring a fantastic team of young and passionate chefs across Ovolo's restaurants and collaborating alongside the talented Shannon Martinez, Matthew Kenney, and Roy Ner, they are considered some of the best in their fields,” said Chef Ian Curley.

Ian will oversee and guide the entire kitchen operation for Ovolo within Australia including Monster Kitchen and Bar in Canberra, The Inchcolm Bar in Brisbane, whilst continue working with Shannon Martinez on the recently launched Lona Misa in Melbourne. Chef Curley will also work alongside Creative Culinary Consultants Roy Ner guides the culinary direction for ZA ZA TA Bar & Kitchen in Brisbane, and Mathew Kenney who leads the vegan initiative behind Alibi Bar and Kitchen in Sydney.

“I am really enjoying lifting an already high benchmark of the food we offer in our restaurants and working alongside these people who inspire me with their enthusiasm as much as I mentor them. Additionally, learning from Ovolo's passionate who genuinely care about food and drink and innovative concepts has been my main reason for taking this broader national role,” Curley continued.

This initiative sees the experienced mentoring the passionate. As Ovolo's Group Creative Culinary Partner, alongside the team of Creative Culinary Conssultants Ian will invest his vast knowledge and experience working with Ovolo's passionate and emerging chefs such as Tom Liang at Alibi Bar and Kitchen in Sydney, Michael Jackson at ZA ZA TA in Brisbane, Mathew Bentley at Monster Kitchen and Bar in Canberra, Isa Raku at Lona Misa in Melbourne and the teams at The Inchcolm Bar in Brisbane and Mister Percy in Sydney.

“We know Ian will set the stage to take Ovolo's dining experiences to the next level in this broader role through developing new food concepts that align with our ethos of ethical eating, conscious cuisine and local sourced produce as well as provide support and mentoring to our passionate chefs across Australia,” says Ovolo's Director of Operations Australia, Wayne Taranto.