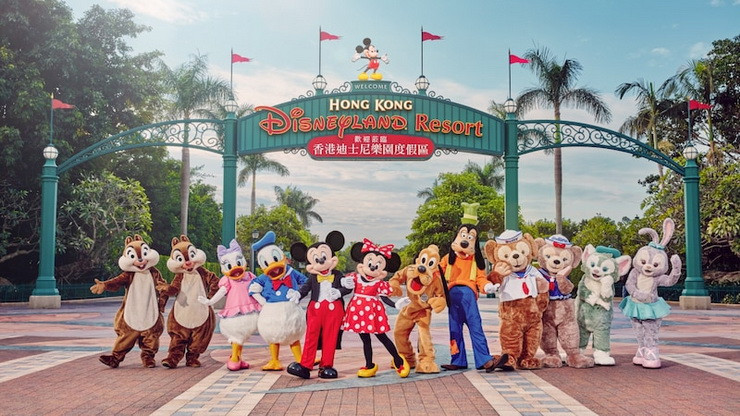 As a result of these challenges, the resort delivered revenue of HK$6.0 billion for the year ending September 28, 2019, comparable to FY18. Park per capita spending set a new record for the tenth consecutive year with an increase of four percent year-over-year.

While annual attendance decreased four percent to 6.5 million, HKDL has welcomed more than 83 million guests since the park opened in 2005. For the full year, hotel occupancy stood at 74 percent.

Due to the FY19 fourth quarter impact, full year EBITDA was down 17 percent to HK$1.1 billion, resulting in a net loss of HK$105 million.

The resort welcomed a diverse guest mix during the year, with locals accounting for 41 percent, while mainland China and other markets were at 33 percent and 26 percent, respectively. Attendance growth in Japan, South Korea and Thailand remained strong, with double-digit growth in each market.

During the year, HKDL reached a significant milestone in its multi-year expansion with the opening of “Ant-Man and The Wasp: Nano Battle!” on March 31, 2019. The attraction has quickly become the most popular attraction at the resort and exhibits a 10 percentage point higher mix of young adult and male guests versus the overall guest mix of the park.

Two outdoor concert events attracted a combined audience of nearly 170,000 from Hong Kong, mainland China and the rest of Asia. They included Grammy award-winning artist Ed Sheeran’s concert in April 2019 and Mayday’s return to the venue for six shows the following month.

For the third consecutive year, HKDL hosted the 10K Weekend, one of the largest running events in Hong Kong. Themed to popular Pixar stories and characters, overall enrolment and non-local participation increased by 20 percent and four percent respectively, compared to the prior-year event.

Looking forward, Young said, “Along with the Castle of Magical Dreams to be unveiled in 2020 and the future opening of a new Frozen-themed area, we’re confident we will manage through the current challenges and work toward  HKDL’s long-term potential.”

The transformed castle will be followed by nighttime spectacular and daytime show.  HKDL will soon launch a number of amazing offerings, which will feature some of the latest and most popular characters and stories from Disney, Pixar and Marvel. This includes a debut character appearance for Ant-Man and The Wasp as well as Black Widow whose new movie will be released later this  year. We will also have an all-new show featuring Anna and Elsa from Frozen 2, and character appearances for the new Disney•Pixar movie Onward, as well as a variety of Disney Princesses.

A community partner in Hong Kong

HKDL is committed to contributing to Hong Kong and serving the local community. In the past 14 years of operations combined, HKDL brought approximately HK$108.5 billion of value-added to Hong Kong’s economy, equivalent to 0.33% of Hong Kong’s GDP, and cumulatively created 269,500 jobs (in terms of man-years), benefiting Hong Kong’s overall economy.

HKDL strives to contribute to the local community by showcasing Disney values and leveraging the strengths of its cast members. In fiscal year 2019, HKDL worked with 400 organisations to provide more than 100,000 complimentary park visits for people in need. We have also contributed over 100,000 hours of skills and services through Disney VoluntEAR programs since park opening in 2005.

HKDL is dedicated to bringing happiness by inspiring and fulfilling the dreams of children with illnesses and special needs, youth and the overall community. With the official opening of the Hong Kong Children’s Hospital in June 2019, over 26,000 pieces of new in-patient clothing were produced thanks to The Walt Disney Company-funded project “Dress Well,” addressing the unique needs of child patients.