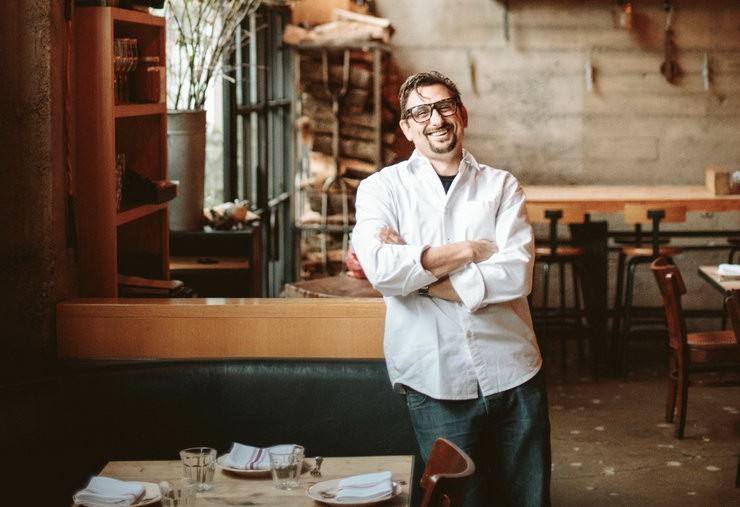 Chris Cosentino is the chef and owner of San Francisco restaurant, Cockscomb, where he reinterprets classic San Francisco dishes by adding his own unique twist.

HONG KONG -- Hong Kong Airlines has launched a brand new Business Class menu for its customers travelling out of Los Angeles International Airport (LAX) from 22 March 2019. Designed exclusively by celebrity chef and television personality Chris Cosentino, the new LAX Business Class menu is an adaption of his current San Francisco Business Class menu and comes with a slight twist to cater to the preferences of Southern California travellers.

Chris Cosentino is the chef and owner of San Francisco restaurant, Cockscomb, where he reinterprets classic San Francisco dishes by adding his own unique twist. He is also known as the winner of Top Chef Masters, a contestant on The Next Iron Chef and for his appearance in Iron Chef America in addition to his extensive work raising awareness and funds for Chefs Cycle in support of No Kid Hungry, a national charity fighting to end childhood hunger.

Chef Cosentino collaborated with Hong Kong Airlines in late 2017 to design a comprehensive menu of 12 dishes, including a series of appetizers, main courses and desserts to be rotated regularly on the airline's service from San Francisco International Airport (SFO) to Hong Kong. His Business Class inflight menu was officially launched on the SFO inaugural flight to Hong Kong on 25 March 2018 and has received positive feedback from Hong Kong Airlines' customers for his "big in flavour, rich in texture" dishes.

"When the opportunity came for me to work with Hong Kong Airlines to make delicious inflight meals in Business Class, I jumped at the chance," said Chef Cosentino at a media preview event in Los Angeles on Thursday.

Using my years of education and experiences to create meals that would not only satisfy but excite the guests at 10,000 feet up and giving a fresh new approach to what inflight food can be has been a complete joy. Launching our new menu on the Los Angeles-Hong Kong route is very exciting. I am looking forward to flying on the first flight showcasing the menu," he added.

Passengers travelling from Los Angeles can expect a hearty and cohesive three-course menu prepared by Chef Cosentino. Known for his creative use of ingredients and attention to balance, Hong Kong Airlines' customers will be treated to Chef Cosentino's refreshing appetizers such as Kohlrabi Caesar, shrimp, Parmesan and sourdough croutons followed by main courses featuring different proteins on rotational basis. They include his take on the traditional recipe of chicken piri piri with Piquillo pepper, potatoes, Castelvetrano olives and oregano or red wine braised beef short rib with white bean puree, fennel al Forno, pickled peppers and confit garlic cooked to perfect tenderness and more. No meal is complete without dessert and Chef Cosentino's signature panna cotta with strawberries and balsamic vinegar is set to charm Hong Kong Airlines' passengers with its delightful flavours. Please refer to appendix for Chef Cosentino's full menu.

Mr Chris Birt, Hong Kong Airlines Director of Service Delivery said: "Hong Kong Airlines always strives to deliver the best services to our customers. We launched our menu partnership with Chef Cosentino exactly a year ago on our San Francisco route. His menu has proven to be such a hit with our Business Class customers that we are excited to now bring his signature innovative and creative cuisine to those flying with us from Los Angeles."

Hong Kong Airlines' Los Angeles service was launched in December 2017 and was the airline's first destination in the continental United States. The daily service is currently operated by Airbus A350, one of the newest and most technologically advanced aircraft in the world. In September 2018, Hong Kong Airlines introduced its new Business Class product on the Los Angeles route, reaffirming its commitment to serve the USA market with its best products and services.