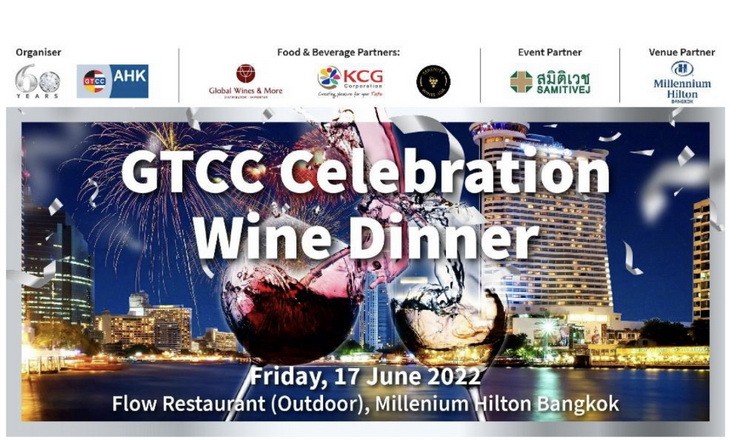 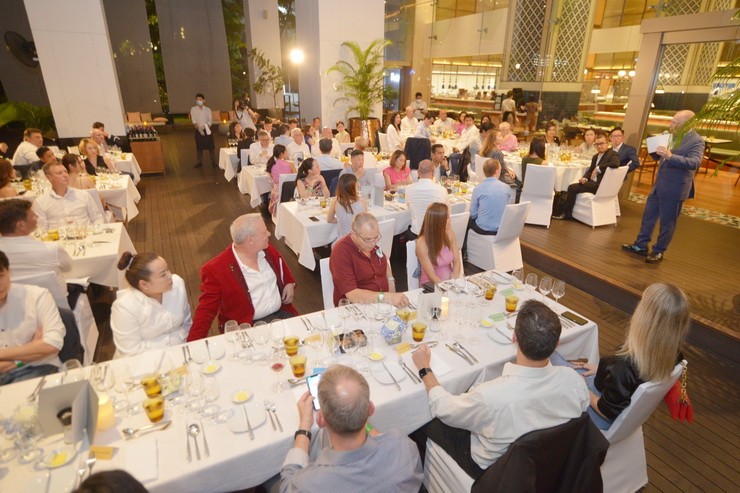 The Chamber organised “The GTCC Celebration Wine Dinner” to commemorate this new milestone with its members, partners and friends.

Bangkok, Thailand - The German-Thai Chamber of Commerce (GTCC) has celebrated its 60th anniversary through a crafted four-course dinner paired with a fine selection of premium wines in the elegant atmosphere of the award-winning Millennium Hilton Bangkok and a spectacular view of Chao Phraya River.

The Chamber organised “The GTCC Celebration Wine Dinner” to commemorate this new milestone with its members, partners and friends, on Friday, 17 June 2022 at the Flow Restaurant of the Millennium Hilton Hotel in Bangkok. Included in the guests of honour from the German Embassy Bangkok were Mr. Hans-Ulrich Südbeck, Deputy Head of Mission.

At the dinner, GTCC President Mr. Michael Welser welcomed about 80 guests. He said “It is my great pleasure to welcome all of you to our “GTCC Celebration Wine Dinner” tonight. As you all know, this year marks the 60th anniversary of the foundation of the German-Thai Chamber of Commerce. Our history officially started on the 19th July 1962 at the Erawan Hotel.

Over the past 60 years, GTCC has grown into one of the largest foreign chambers of commerce in Thailand, from 57 founding members comprising German and Thai merchants and entrepreneurs in 1962, to 535 member companies currently operating in various business sectors. Our service portfolio has also significantly extended from import-export support to market and sales consultancy, information events and trade fair services as well as dual vocational education and training in Thailand based on German standards.

Guests were invited to participate and make a donation for the CD“Tree for ALL Initiative” as one of the activities during GTCC’s 60th anniversary celebrations. “GTCC supports the RECOFCT Tree for ALL Initiative to enhance the private sector contribution to tree planting and long-term landscape management to develop livelihoods and restore ecosystems. GTCC aims to plant a total of 600 trees with the contribution of our members in commemoration of GTCC’s 60th anniversary,” said GTCC President Mr. Michael Welser.

GTCC has been supporting companies and institutions from Germany and Thailand in opening up and strengthening trade and investment opportunities since 1962.