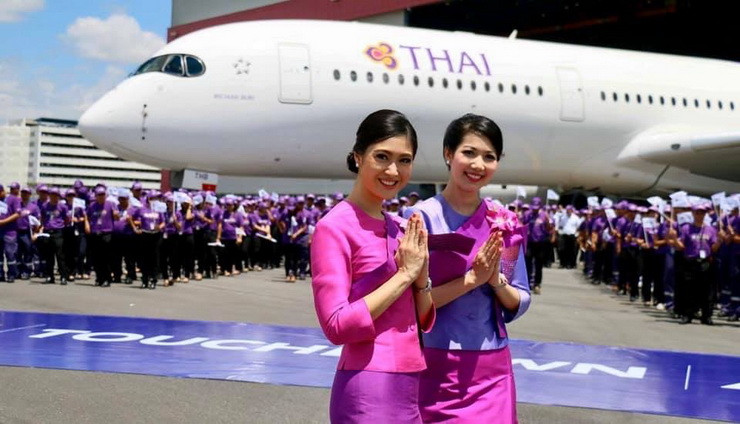 Prime Minister Prayut Chan-o-cha announces the cabinet's decision that Thai Airways International will file for bankruptcy, at Government House in Bangkok on Tuesday.

The cabinet on Tuesday resolved that cash-strapped Thai Airways International (THAI) would file for bankruptcy at the Central Bankruptcy Court in order to work out its rehabilitation according to the Bangkok Post.

Prime Minister Prayut Chan-o-cha was reported to have said it was the best course to help the troubled airline back onto its feet. Under the rehabilitation plan, THAI would not receive financial assistance from the government and its 20,000-member staff would not be laid off.

"It is a difficult decision but it is in the national and public interest," he said.

The other two options that the government decided against were:

Both options were rejected opting instead to file for bankruptcy at the Central Bankruptcy Court. The Thai Finance Ministry owns 51 percent of the airline.

The prime minister said that it had been difficult to rehabilitate THAI because there were legal restrictions under labour and state enterprise laws.

To send the airline to the Central Bankruptcy Court was the best choice and there would be many subsequent procedures to solve the internal problems at the enterprise, Gen Prayut said.

"Today it is time to show the courage to undergo the rehabilitation process at the court. Today Thailand and countries worldwide face a crisis. Thailand must spend money to help people, farmers, SMEs, wage earners, self-employed people and those who work hard for their families," he said.

"The Covid problem is not yet over. The most serious issue is the survival of the people of Thailand. I do not know when they can return to normal work. This is a crisis that will continue in the future."

THAI continue to deny they are in bankruptcy protection but the government are crystal clear. However Gen Prayut said that THAI would continue operating.

"With professional management, it will regain its strength. Its staff will keep their jobs and it will be restructured. The court will decide the details," he said.

TTRWeekly a respected Thailand based publication since 1978 reported Thai Airways International Public Company Limited publicly denied any intentions to file for bankruptcy in a press statement and Facebook post.

The national airline said it was responding to rumours in local media and by social media that erupted over the weekend following a board of directors meeting held on 15 May. In its official rebuttal, the airline stated that its “reform plan had been approved by the THAI board 17 April and presented to the State Enterprise Policy Office for consideration 29 April 2020.

“The plan will soon be presented to the Cabinet for further action. The Board of Directors made no resolution to file for bankruptcy as appeared in the news. THAI again denies the bankruptcy rumours,” the statement read.

Acting THAI President Chakkrit Parapuntakul said the airline will not be dissolved and would not go into liquidation or be declared bankrupt but would carry out its rehabilitation plan effectively. Pending the rehabilitation process, the airline would continue with its normal service, he said.

“THAI is committed to do everything possible to emerge from the crisis situation,” the second Vice Chairman and now Acting President said. THAI expressed their gratitude to all stakeholders and added that they will resume full operations once the Covid-19 situation subsides. The airline added that THAI air tickets are still valid for travel and passengers holding those tickets are advised to contact THAI via website thaiairways.com

According to the Stock Exchange of Thailand, THAI's assets were recorded at 256 billion baht at the end of last year while its total debts stood at 245 billion baht. The airline's debt-to-equity ratio has skyrocketed to 21:1.