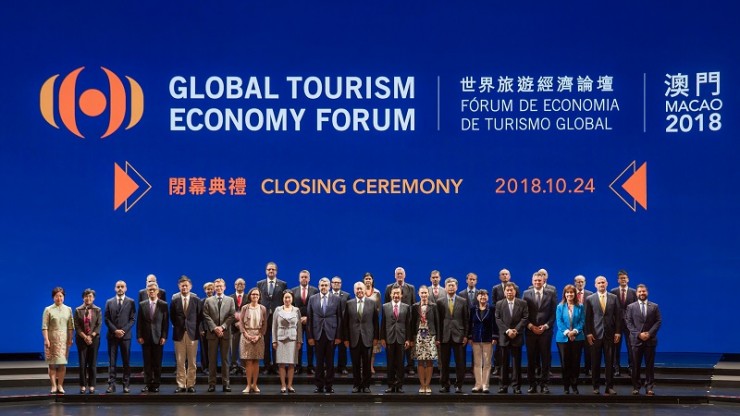 Vice Chairman of the National Committee of the Chinese People's Political Consultative Conference and Forum Chairman of GTEF, Ho Hau Wah (middle in the front row), and other officiating guests 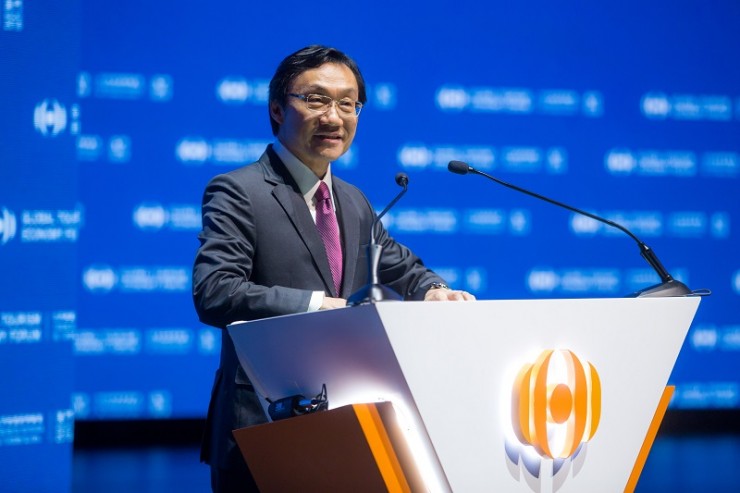 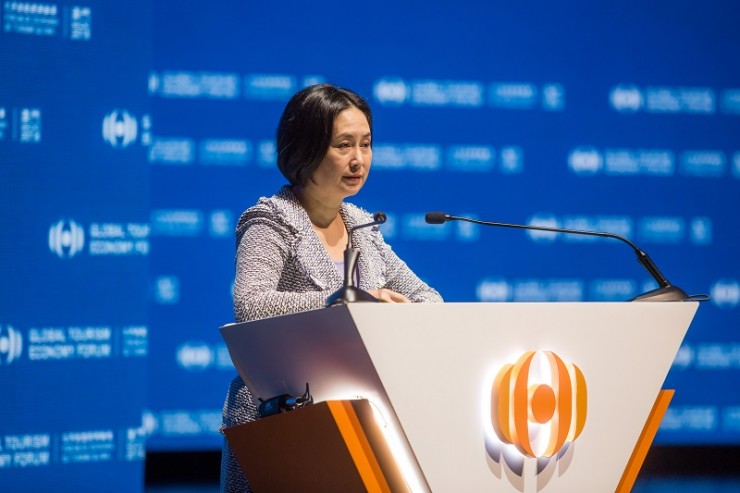 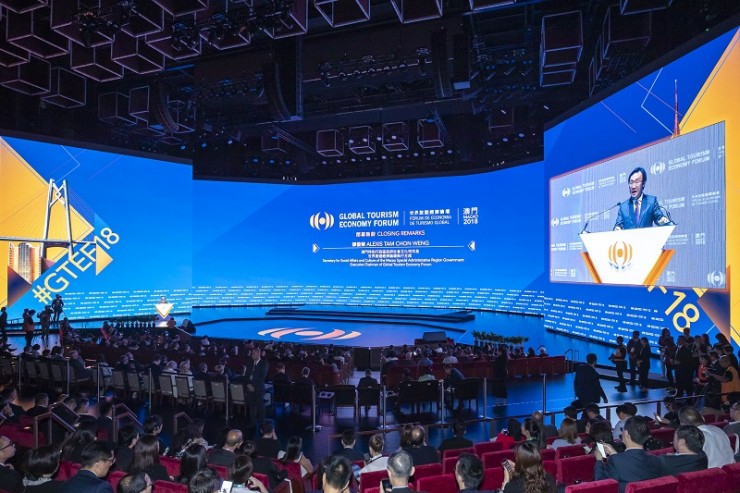 Global Tourism Economy Forum • Macao 2018 ushers in a new chapter for strategic partnership in a new era, rising momentum for a shared future.

Macau - Global Tourism Economy Forum • Macao 2018 (“GTEF” or “the Forum”) concluded after a two-day program of fruitful exchanges and discussions, business matching, presentations and exhibition. A closing ceremony was held at MGM Cotai this afternoon (24 October).

Vice Chairman of the National Committee of the Chinese People's Political Consultative Conference and Forum Chairman of GTEF, Ho Hau Wah, Secretary-General of the World Tourism Organization (UNWTO), Zurab Pololikashvili, Secretary for Social Affairs and Culture of the Macao Special Administrative Region Government and Executive Chairman of GTEF, Alexis Tam, and Vice Chairman and Secretary‐General of GTEF, Pansy Ho, were among the dignitaries present at the closing ceremony today.

Under the theme “Strategic Partnership in a New Era, Rising Momentum for a Shared Future”, the 7th edition of GTEF examined the impact of strategic tourism cooperation between China and the European Union (EU) in the 2018 EU-China Tourism Year, and explored the myriad of opportunities brought by the Guangdong-Hong Kong-Macao Greater Bay Area development.

Fully delivering a high-level platform for international tourism exchange and cooperation, GTEF 2018 successfully gathered over 2,000 ministerial officials of tourism and related fields, industry leaders, experts, scholars and participants from across the globe in the two-day program, including delegations from the 28 member states of the EU as GTEF 2018 Partner Region, and Guangdong Province as GTEF 2018 Featured Partner Chinese Province, for a series of profound discussions and sharing of insightful perspectives.

An array of memoranda of understanding and agreements were signed between different entities during the Forum to consolidate their partnerships, while about 200 enterprises and organizations from different sectors across different countries and regions including China and member states of the EU engaged in business matching to unfold deeper cooperation and exchange.

Over 120 journalists from international and local media attended and covered the two-day event.

In his closing remarks, Secretary for Social Affairs and Culture of the Macao SAR Government and Executive Chairman of GTEF, Alexis Tam, highlighted the fruitful harvest of the Forum in this edition.

He stated, “As a Special Administrative Region of the People’s Republic of China, Macao boasts cultural and tourism advantages given by our unique history and governing system. Capitalizing on these strengths, we shoulder the mission to push forward tourism cooperation and cultural exchange on a global scale, and expand the spectrum of national collaboration with other countries and regions.”

He continued, “The Belt and Road Initiative advocated by our President Xi Jinping holds the key to a new horizon of opportunities for global tourism and economic development. At the same time, the Guangdong-Hong Kong-Macao Greater Bay Area is steadily developing into China’s most vibrant region which demonstrates the strongest economic dynamic. Against such backdrop, Macao is a member of the China Maritime Silk Road Tourism Promotion Alliance and the Tourism Federation of Cities in Guangdong, Hong Kong and Macao Bay Area. We are dedicated to building extensive connectivity for tourism and economic cooperation between China and EU member states, while fostering fruitful exchange and expanding new possibilities for innovative partnerships, products and services in the making.”

To conclude, he expressed that since the inaugural edition, the Forum has thoroughly embraced the spirit of “collaboration and mutual success, openness and inclusiveness”. In the days ahead, the Forum will pour a greater effort to build new avenues and bridges among countries and regions, and facilitate collaborative partnerships between the public and private sectors in the field of tourism, as all join hands to build “Strategic Partnership in a New Era, Rising Momentum for a Shared Future”.

In her concluding remarks, Vice Chairman and Secretary‐General of GTEF, Pansy Ho, expressed, “The Global Tourism Economy Research Centre created GTEF to bring people together and create opportunities for cooperation through travel and tourism. Seven years later today, GTEF’s intended function as a Virtual Bridge has achieved unprecedented results in this 2018 edition. One of the most crucial factors in strategic partnership is timing. Being able to seize the moment and align with a partner who strives for common goals and shared responsibility is what makes a partnership strategic. The opportune moment is now. This year marks the 15th anniversary of the adoption of the EU-China Strategic Partnership, 2018 China-EU Tourism Year, the imminent launch of the Guangdong-Hong Kong-Macao Greater Bay Area development plan.”

She added, “In the last two days, GTEF welcomed over 2,000 participants from 42 countries, including the EU member countries and Guangdong Province. It has held over 200 business matching sessions. GTEF has also elevated its alliances with its strategic partners: UNWTO and GTERC have renewed its collaboration in the joint Asia Tourism Trends research report after five years of success collaboration. WTTC has leveraged GTEF’s influence to hold its half-day Asia Leader Forum before GTEF. GTEF 2018’s Partner Region, the European Union has also selected GTEF to hold its PET Conference. Last but not least, a total of five provincial federations signed Memorandum of Understanding with GTERC for future collaboration. GTEF’s supporting unit, All-China Federation of Industry and Commerce, representing the entire private sector in China, brought a delegation of 270 members and vice chairmen of 14 of its provincial federations to GTEF 2018.”

The World Tourism Organization (UNWTO) and the Global Tourism Economy Research Centre (GTERC) delivered their fifth joint research report on Asia Tourism Trends during the Forum. A collaboration of UNWTO and GTERC, the report enabled delegates to gain an insight into the latest tourism outlook of the Asia-Pacific region, a statistical analysis of Chinese Outbound Tourism to Europe and European Union Outbound Tourism to China, as well as the development potential and opportunities across the Guangdong-Hong Kong-Macao Greater Bay Area.

In this 7th edition, the Forum not only featured its signature discussion panels once again in cooperation with its major collaborative partner UNWTO and supporting units including Pacific Asia Travel Association (PATA) and World Tourism Cities Federation (WTCF), but also presented new panels in cooperation with other entities including All-China Federation of Industry and Commerce (ACFIC), the United Nations Educational, Scientific and Cultural Organization (UNESCO), European Tourism Association (ETOA), The European Travel Agents’ and Tour Operators’ Association (ECTAA), The Macau Chinese Enterprise Association, and Greater Bay Area Youth Federation. Several Special Keynotes and a Special Keynote Interview were also featured as new highlights in the programme.

Before drawing the curtain on this edition, the Forum unveiled GTEF 2019 Partner Countries and Featured Partner Chinese Province to delegates. GTEF 2019 will feature Brazil and Argentina as Partner Countries. Secretary of Coordination and Tourism Investments of National Tourism Ministry of Argentina, Sebastián Slobayen, and Chief of the Special Advisory for International Relations of the Ministry of Tourism of Brazil, Rafael Luisi, each presented an overview of their countries’ tourism and economic situation. 2019 is the year to celebrate the 5th anniversary of the Forum of China and Community of Latin American and Caribbean States (CELAC) and the 45th anniversary of diplomatic relations between China and Brazil. GTEF is committed to deepening tourism collaboration between China and Latin American countries, building on the achievements in the fourth edition when GTEF featured the Pacific Alliance member countries (Chile, Colombia, Mexico and Peru) as Partner Countries and unlocked cooperation opportunities between China and these countries. Furthermore, GTEF 2019 Featured Partner Chinese Province, Jiangsu Province, gave a fascinating presentation about its cultural and tourism strengths as one of China’s most economically competitive provinces. The presentation was delivered by Deputy Director General of the Department of Culture and Tourism of Jiangsu Province, Chen Fen.

The 8th edition of GTEF will be held in Macao in 2019. Based on the experience of the last seven editions, the Forum is poised to innovate on its programme and format, and help delegates to forge wider tourism cooperation across industries, sectors and regions through the international exchange platform.

The Global Tourism Economy Forum is hosted by the Secretariat for Social Affairs and Culture of the Macao Special Administrative Region Government in collaboration with the World Tourism Organization (UNWTO), initiated and co-organized by the China Chamber of Tourism under the authorization of the All-China Federation of Industry and Commerce (ACFIC) and coordinated by the Global Tourism Economy Research Centre (GTERC). GTEF’s supporting units include the Ministry of Culture and Tourism of the People's Republic of China, All-China Federation of Industry and Commerce, the Liaison Office of the Central People’s Government in the Macao Special Administrative Region, Office of the Commissioner of the Ministry of Foreign Affairs of the People’s Republic of China in the Macao Special Administrative Region, Macao Government Tourism Office (MGTO), World Travel and Tourism Council (WTTC), Pacific Asia Travel Association (PATA), World Tourism Cities Federation (WTCF) and European Travel Commission (ETC).