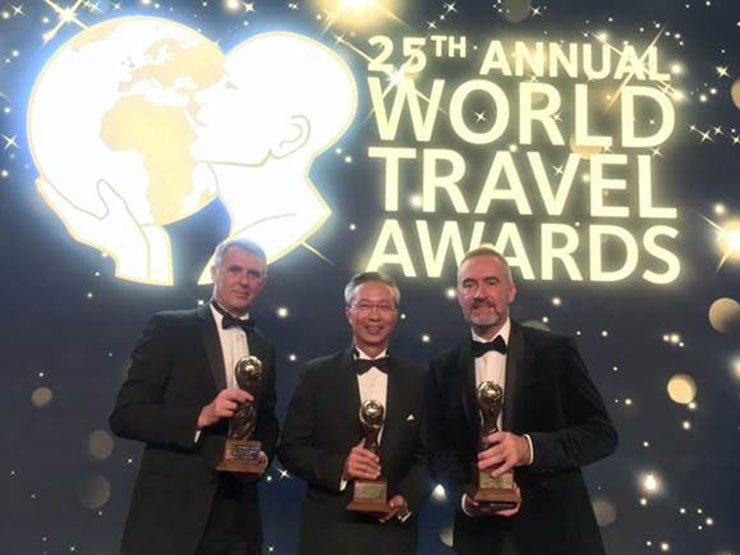 Singapore – Frasers Hospitality, a member of Frasers Property Group, has clinched three major awards at this year’s World Travel Awards (WTA) grand finals, including the World’s Leading Serviced Apartment Brand for the fifth year running and Fraser Suites Le Claridge Champs-Elysees in Paris, France as the World’s Leading Serviced Apartment for the third time. Chief Executive Officer Choe Peng Sum was also recognised with the Lifetime Achievement Award, marking the first time the accolade is being presented to a leader in the serviced apartment industry.

Voted by tourism professionals and business and leisure travellers worldwide, the accolades are an endorsement of Frasers Hospitality’s service excellence in the travel, tourism and hospitality industries, setting a benchmark for the serviced apartment sector.

“We are honoured to be recognised as the World’s Leading Serviced Apartment Brand once again. It’s an achievement to win a prestigious global award like this, but to retain the title for five consecutive years is truly momentous. This award is a testament to the high service standards we strive to uphold and our commitment to continuously anticipate and exceed our guests’ expectations no matter where they are in the world,” said Mr Choe.

Concluding the evening was a special presentation of the Lifetime Achievement Award to Mr Choe, in celebration of his work and contributions in the serviced apartment sector.

“This award is very special to us as it rounds off a year of celebration and gratitude in line with our 20th anniversary. I am truly humbled to be awarded this accolade and I’d like to thank all my staff for making it possible for Frasers Hospitality to be recognised on this world stage. I am very fortunate to work alongside a team that shares the same vision in wanting to create memorable guest experiences and to push the boundaries through continuous innovation", said Mr Choe.

“Together, we owe this win to all our guests who have remained steadfast in their belief in us through the years, and we look forward to many more years of delivering the best in hospitality,” he added.

The three awards cap off an eventful year for Frasers Hospitality at WTA, having secured a total of 21 titles for its brand and properties in various regions, including World’s Leading Serviced Apartment Brand in Australasia, England, France, Hungary, Indonesia, Singapore and Vietnam, as well as accolades for properties in Bahrain, Germany, Qatar, Scotland and Turkey.

The awards by WTA are just a few of over 100 brand and property awards garnered worldwide by Frasers Hospitality in 2018, including notable titles such as Best Serviced Residence Operator by TTG Travel Awards for the sixth year running; Best Serviced Residence in China by Business Traveller China, as well as Hall of Fame recognition for Fraser Suites Sydney as the Apartment/Suite Hotel of the Year by Tourism Accommodation Australia.