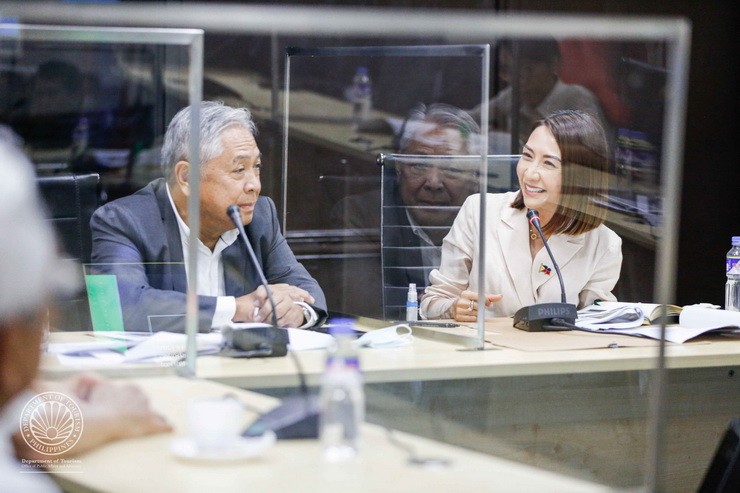 The primary gateway to the country, airports and seaports play an integral role in the overall tourist experience and the tourism value chain.

Department of Tourism (DOT) Secretary Christina Garcia Frasco eyes bringing improvements to the country’s air and seaports to encapsulate the “Filipino Brand” and give tourists a good first and last impression when they visit The Philippines.

In a meeting with Department of Transportation (DOTr) Secretary Jaime J. Bautista on Monday (August 8), the tourism chief noted that as the primary gateway to the country, airports and seaports play an integral role in the overall tourist experience and the tourism value chain.

The DOT, she added, envisions improving existing facilities in both airports and seaports by introducing enhancements that will make the ports more aesthetically pleasing, convenient, tourist-friendly, and most importantly, reflective of the “Filipino Brand”.

“Aside from improving convenience to travelers and tourists, the DOT also looks at putting a ‘Filipino Brand’ to our ports, a good image of the Philippines that would remain in the memories of visitors to the country before touring different destinations in the Philippines and long after they have left,” Secretary Frasco said.

Some of the DOT’s recommended enhancements include the installation of signages that will have a uniform look in all air and seaports, as well as the use of lighting, backdrop, and furniture that will distinctly reflect the “Filipino Brand”. Frasco noted that the DOT wants “the experience to be positive for all senses” and that there will also be interactive displays that will feature various artists and artisans to make the airport experience extraordinary and experiential for travelers.

“Traditionally, the Department of Tourism has been involved in the promotion and marketing purely and mostly in ads but this time around we wanted a tacit manifestation of our brand as the Philippines because this is what the President very clearly said in his SONA, that he wants us to promote the Filipino brand to the world. This is something we would like to herald in the Philippines beginning with our pride, and our culture, our heritage, our identity as Filipinos. And that is why the elements of the aesthetic improvements that we wish to introduce are all made in the Philippines and distinctively Filipino,” enthused the DOT chief.

In addition to aesthetically appealing ports, the DOT is also pushing for a passenger experience that is stress-free with more efficient service and reduced passenger waiting time. DOT recommends a One-Stop-Shop for land, air, and sea connectivity with provision for digitalized service to facilitate efficiency. The Department also committed a tourism assistance desk with trained personnel to facilitate visitors’ concerns.

Frasco likewise underscored the need to provide appropriate features and facilities in gateways and transport hubs for persons with disabilities (PWDs) as part of the Department’s advocacy for Barrier Free Tourism. Availability of wheelchairs, elevators with PWD -friendly features, clearly designated PWD parking slots, and check-in counters with low and recessed or split-level counters that can accommodate persons seated on wheelchairs were among the proposals of the DOT.

Meanwhile, the resumption of pre-pandemic routes was suggested by the DOT to minimize the congestion in the major ports. The opening of new local and domestic routes was also proposed by the Department given the positive developments in travel conditions and demand.

“While we understand that introducing major infrastructure changes to the existing airports and seaports is something that cannot be done in the short-term, in answer to the call of the President to improve the overall tourist experience, we have identified ways where we can introduce enhancements that do not necessarily entail long-term actions,” the tourism chief added.

The program, to be led by the DOT with the support of the DOTr, will be a joint partnership between the two agencies. During the meeting, Transportation Secretary Bautista agreed to the DOT’s proposal to create a Technical Working Group (TWG) that would oversee a smooth and comprehensive facilitation of the enhancement program.

“I think our experience working with airlines and now working with government will now allow us to solve the problems and the issues and working with the Department of Tourism we can better improve the experience of our tourists.  I am very happy we started this conversation and I agree that we need to further discuss the details of the project, let’s organize a working group. This is a very good collaboration between the DOT and the Department of Transportation. Let’s make it happen,” said Bautista.
In addition to its recommendation to reinstate identified domestic and international flights, the DOT also proposes to strengthen its partnership with the DOTr on the aspect of air and sea routes development.