Mr. Frank Chan Fan, Secretary for Transport and Housing, said through a video that SKYCITY will be a shining star of the airport island and he looked forward to the opening of the 11 SKIES commercial building project in mid-2022. 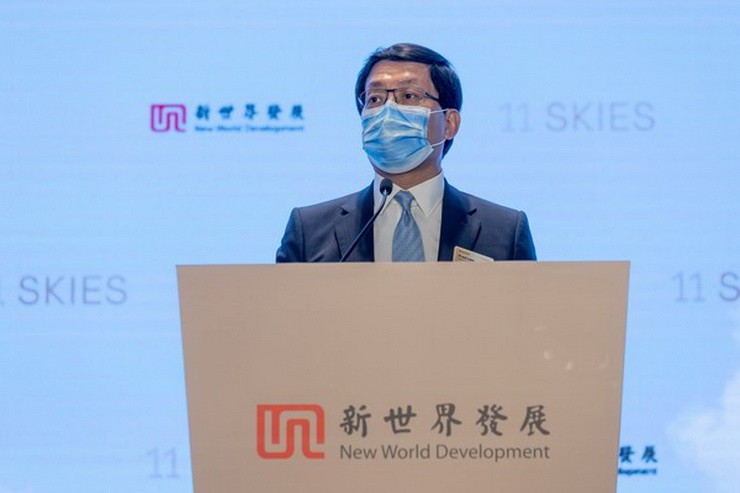 Hong Kong - As the local COVID-19 fifth wave eases, different industries are actively preparing business plans ahead of a reopening of Hong Kong's borders. 11 SKIES, the largest one-stop destination for retail, dining, entertainment and business in Hong Kong, is the most high-profile multi-purpose new landmark opening in the city in recent years. Three Grade A office towers in the complex, the K11 ATELIER 11 SKIES, will open in July. At the "How SKYCITY takes Hong Kong to a New Level" forum today, close to 20 leaders in finance, insurance, medical services, tourism and innovation and technology discussed how 11 SKIES, as part of the SKYCITY development at Hong Kong International Airport, could help Hong Kong's post-pandemic recovery. In addition, they explored how Hong Kong could seize the vast opportunities the Greater Bay Area (GBA) offers in business and tourism. More than 10,000 business figures took part in the event in person and online.

Focusing on the themes of professional services, tourism and innovation and technology, the forum heard from senior industry figures how SKYCITY and 11 SKIES could strengthen Hong Kong's dual role as an international financial centre and professional services hub, and at the same time leverage on its unique strengths to re-energise industries hit by the pandemic and improve customer experience with innovative technology. Earlier, a large-scale survey conducted by market research firm NielsenIQ found that more than three-quarters of residents in the nine Mainland cities of the GBA wanted to visit Hong Kong after the border reopens, with 95% of them also keen to visit 11 SKIES. Boasting a host of attractions that are first-in- Hong Kong, 11 SKIES is set to become a new landmark in SKYCITY and for the city, drawing visitors locally, from the GBA and the rest of the world.

Forum guest-of-honour, Mr. Frank Chan Fan, Secretary for Transport and Housing, said through a video, "SKYCITY is a major project of the 'Airport City'. Together with the adjacent AsiaWorld-Expo Phase II development, the leisure and catering developments on the Hong Kong Boundary Crossing Facilities (HKBCF) Island of the Hong Kong-Zhuhai-Macao Bridge and the new autonomous transportation system, SKYCITY will be a shining star of the airport island. In addition, it will be an important engine for the diversified and multi-functional development of the Airport City. We keenly look forward to the opening of the 11 SKIES commercial building project in mid-2022."

In his keynote speech, Mr. Fred Lam, Chief Executive Officer, Airport Authority Hong Kong said: "All long-term major development projects at the airport are progressing as planned. The Three-runway System, together with other major developments such as SKYCITY, will further enhance the airport's capacity and functionality with a view to realising the Airport City vision and transforming the airport into a destination in itself. An integral part of SKYCITY, AsiaWorld-Expo is aimed to develop into Asia's premier entertainment landmark and a platform for global businesses to promote their products and services to the Mainland China market. We expect strong synergy between AsiaWorld-Expo, 11 SKIES and other components of SKYCITY, such as the leisure and hotel developments at the Airport City Cove."

Adrian Cheng: "A launchpad for Hong Kong's economic and trade activity with the GBA"

In his welcome remarks, Mr. Adrian Cheng, CEO, New World Development said: "11 SKIES will feature a number of 'Hong Kong-first' attractions, including SkyTrack, the world's longest indoor and outdoor karting track, the first KidZania in Greater China, the first flying theatre in Hong Kong, and the largest retail, dining and indoor entertainment hub in Hong Kong. I believe that 11 SKIES will be the first stop for GBA visitors to Hong Kong, serving as a launchpad for Hong Kong's economic and trade activity with the GBA. It will also be key to building a new economic driver for Hong Kong. Once the border reopens, SKYCITY and 11 SKIES promise to be a source of business and prosperity. With creative new ideas, visitors from both the GBA and overseas will continue to come to Hong Kong for business, tourism and consumption. 11 SKIES will be a new force that spurs Hong Kong's post-pandemic recovery."

Several speakers at the forum pointed out that SKYCITY and 11 SKIES promise huge business and tourism opportunities. They believed that the project will attract a large number of visitors and accelerate local tourism recovery. At the same time, the clustering of professional services such as cross-border financial management, insurance, medical and wellness services in the Grade A office towers of 11 SKIES will boost economic demand and customer traffic. Various speakers also agreed that the use of smart and innovative technology in the operations and services of SKYCITY and 11 SKIES will enhance efficiency and customer experience, attracting not only more visitors, but also businesses, especially technology companies and start-ups.

Located next to the Hong Kong International Airport and the Hong Kong-Zhuhai-Macao Bridge, 11 SKIES enjoys a 'double port' edge, serving as a 'double gateway' to the world and the GBA. A HKD20 billion investment in an integral part of SKYCITY, 11 SKIES occupies a total floor area of 3.8 million square feet. It combines Grade A office towers, Hong Kong's largest indoor entertainment hub offering world-class immersive experiences, as well as a wide range of retail and dining facilities. With over 800 shops including more than 120 dining concepts, it is set to become the largest landmark for retail, entertainment and business in Hong Kong, attracting global visitors and companies to set up base. The development will open in phases between 2022 and 2025. The entertainment facilities and shopping mall will open in 2023 and 2024 respectively, promising new energy to boost the local economy.