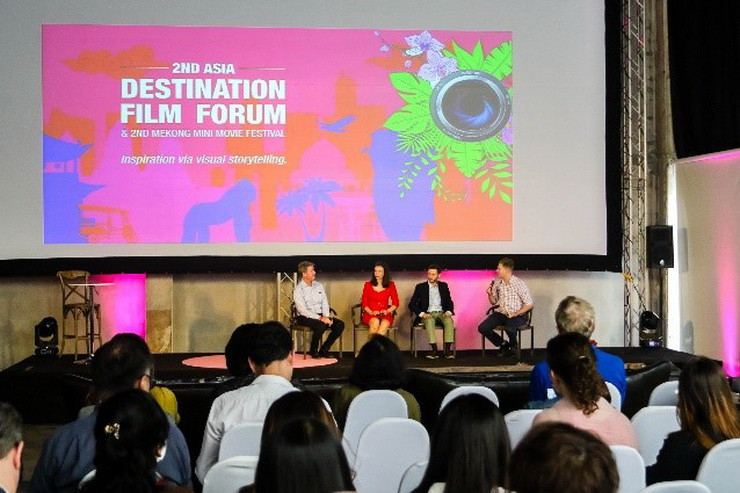 Over 200 delegates convened to attend sessions by industry leaders in tourism and film to celebrate the impact films have on tourism marketing and sustainability at Quaint Bangkok on 30 January 2020.

The Asia Destination Film Forum 2020 was an event studded with sessions by filmmakers, leaders from the tourism industry, and NGOs to celebrate the importance of film on destination marketing and sustainability. With video screenings from the one-minute Mekong Minis to feature films “The Last Reel” from Cambodia and “The Steed” From Mongolia.

The event started with welcome remarks by Mr. Jens Thraenhart, Founder of the Asia Destination Film Festival and Executive Director of the Mekong Tourism Coordinating Office and Dr. Sorajak Kasemsuwan, Secretary General of the National Federation of Motion Pictures and Contents Associations Thailand, whom both impressed on the importance of film to engage audiences and promote destinations. The keynote by H.E. Mr. Weerasak Kowsurat, Senator and former Minister of Tourism and Sports, Thailand, on the power of visual storytelling for destinations addressed how film can convey stories about ASEAN all over the world, how movies can make people think, and inspire them to travel to new destinations and consider new experiences.

The seventeen sessions at the Asian Destination Film Forum included several filmmakers, including Mr. Les Nordhauser, Founder/Executive Producer at Greenlight Films and former Chair of the American Association of Film Producers, Mr. Nick Ray from Hanuman Films Cambodia, who presented his experience in working on productions such as “Lara Croft: Tomb Raider”, “The Last Reel”, “Travels with my Father”, as well as other BBC and Netflix series, Mr. Richie Moore, who worked on films such as “Bangkok Beautiful” and “Changeland”, Mr. Ekachai Uekrongtham, who spoke about his Netflix hit-series “The Stranded” and how he considers the locations to be characters of the story, and Mr. Nicholas Simon, founder and CEO of Indochina Productions, who worked on the Avengers movie productions in Asia, as well as “Kong: Skull Island”. Mr. Simon shared his experience in working with destinations and the potential of Asia for film locations.

Executive interviews with producers, such as Mr. Tom Waller “The Cave” and Mr. Erdenebileg “The Steed” to talk about practical challenges in making films and finding locations as well as Mr. Deepak Ohri, CEO of Lebua Hotels & Resorts, to discuss how businesses can leverage film to position themselves were providing the Asia Destination Film Forum with an exciting change in format throughout the day. Presenting the role of destinations in setting the stage and benefiting from film were Mr. Raymong Kim, who was instrumental in positioning Busan South Korea as filming location, Mr. Tanes Petsuwan, Deputy Governor for Marketing Communications of the Tourism Authority of Thailand, presenting how film impacts destinations in Thailand, Mr. Joe Choo who presented how the Singapore Tourism Board is leveraging films such as “Crazy Rich Asians” and “Hitman 47”, and Ms. Bauasgalan Saranjav from the Ministry of Environment and Tourism Mongolia.

The 3rd Asia Destination Film Forum is scheduled to take place on 25 February 2021, and bids for destination partner and host destination are being accepted.