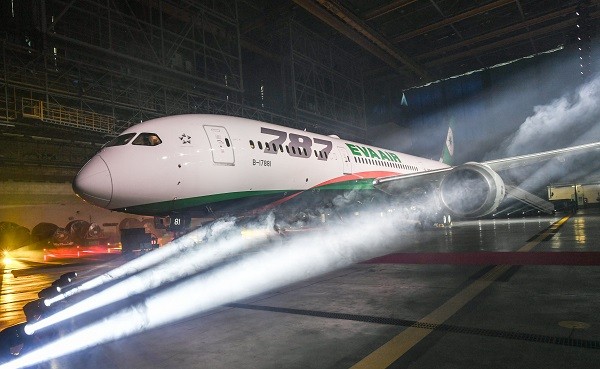 TAIPEI, TAIWAN - EVA Air showcased its first Boeing 787-9 Dreamliner in a grand debut event for Taiwan’s aviation authorities, travel agencies, air cargo freight forwarders, EVA social media fans and employees at Evergreen Aviation Technologies Corp. (EGAT) in Taiwan on October 22, 2018. The airline is adding four 787-9s and 20 787-10s to its fleet between now and 2022. It will take delivery of a second 787-9 this year, the remaining two in 2019 and begin introducing 787-10s in the second quarter of 2019. EVA is using the Dreamliners to refresh its fleet. The technologically advanced aircraft support the airline’s steady growth and continued service quality upgrades.

The Boeing 787-9 Dreamliner has a maximum full-load range of 7,100 nautical miles and can fly nonstop from Taiwan to Vancouver, Seattle, Vienna and Brisbane. The plane is configured for 304 passengers in two cabins, including 26 seats in Royal Laurel Class business and 278 in Economy.

EVA chose Designworks, a BMW Group company, to create its newest generation of Royal Laurel Class. The result is tailor-made business class seats in a bespoke cabin environment of colors muted to enhance passengers’ senses of comfort and space.

EVA used the smile-like curve of the Dreamliner’s wings to create a new commercial film with the theme, “The Smile in the Sky.” And it is building a print campaign around the ideas of “air,” “light” and “water” to focus attention on the advantages that Boeing 787 Dreamliner passengers enjoy. For example, “air” accentuates the optimized cabin pressure that helps reduce jet lag and fatigue, made possible by the composite construction of the fuselage. “Light” emphasizes windows that are the largest offered on an aircraft and allow even middle-seat passengers to enjoy the views. “Water” underscores the cabin’s higher humidity content, three-to-four times greater than on other aircraft, providing better hydration and making passengers more comfortable.

In 2005, EGAT and The Boeing Company contracted to jointly modify four Boeing 747-400s and transform them into Large Cargo Freighters (LCF) with the capacity to transport large composite parts such as Dreamliner fuselages and wings from manufacturing centers around the world to Boeing factories in the US for assembly. The LCFs became operational one after another from 2006 to 2010 and elevated EGAT as a global aircraft maintenance, repair and overhaul leader.

In 2014, EGAT and GE Aviation formed the GE Evergreen Engine Services joint venture. The Engine Services operation is the only GE-certified company in the Asia-Pacific region. It specializes in maintenance services on the GEnx engines that power both the Boeing 787 Dreamliner and Boeing 747-8.

EVA is finalizing preparations and securing certifications for its newest aircraft and expects to put the first Dreamliner in service in November. Initially, it will deploy the Dreamliner on the busy Taipei – Hong Kong route. In December, after the second Dreamliner is delivered, EVA will extend the plane’s services to Osaka and Tokyo. In 2019, EVA will use the remaining two Boeing 787-9s for flights to Australia and Europe.