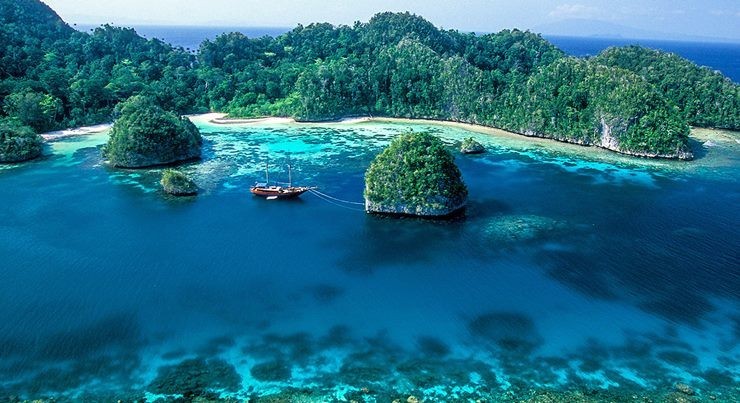 Prior to two devastating shocks, Indonesia was having a good year for tourism; bookings from 1st January were up 10% on the equivalent period in 2017.

Research undertaken by ForwardKeys, which analyses over 17 million flight booking transactions a day, reveals that the recent earthquakes in Indonesia have been responsible for a 26% setback in bookings to the destination since the second major earthquake this year, on August 5th.

Prior to these two devastating shocks, Indonesia was having a good year for tourism; bookings from 1st January were up 10% on the equivalent period in 2017. That growth all but ceased after the first quake; and following the second, bookings have fallen 26%. 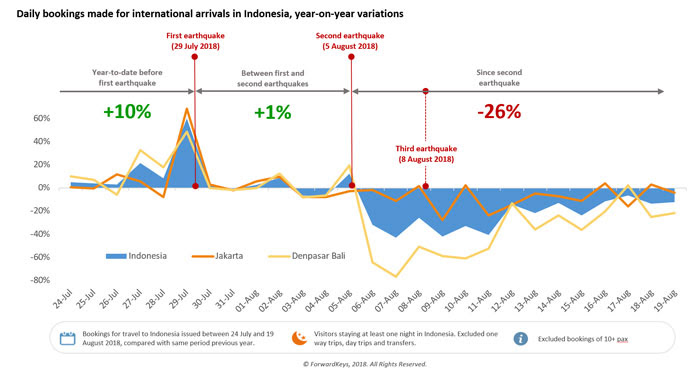 The tourist trade has been particularly badly affected because bookings to the country’s top tourist destination, Bali, which is adjacent to Lombok, have fallen much further than bookings to Indonesia as a whole. From 1st January until the first earthquake, bookings for Bali were 15.2% up; however, since the second quake, they have fallen by 42.9%. According to the World Travel & Tourism Council, Travel & Tourism accounts for 10% of total employment in Indonesia but in the tourism hot spots, such as Bali and Lombok, it is considerably higher. By comparison Indonesia’s capital, Jakarta, which is a regional commercial centre, has fared much better; bookings are down by just 2.2%. 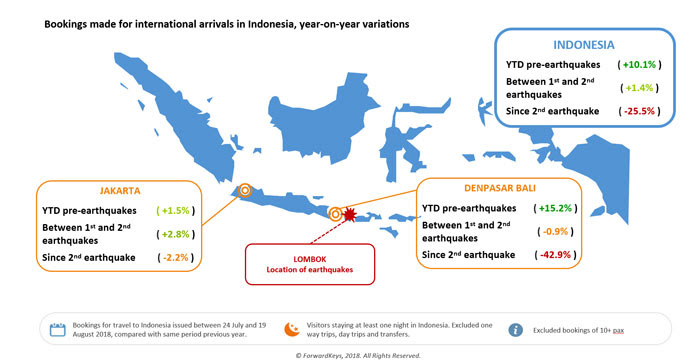 Indonesia’s most important source market is China, accounting for 14% of all visitors. Prior to the second earthquake, bookings were up 3% on the previous year but afterwards they suffered a 59% flop. Bookings from Australia, Indonesia’s second most important market, were up 28% before the second quake but they have since plummeted to be 19% down. Similar booking setbacks have been seen in bookings from Hong Kong, and Singapore but bookings from India are still 16% up on 2017, although they were 38% up prior to the second quake. 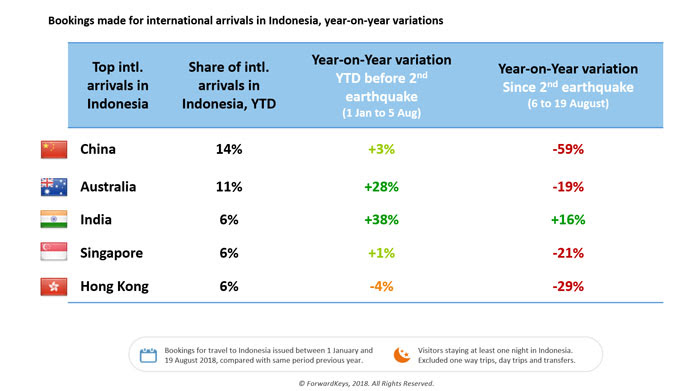 Olivier Jager, CEO, ForwardKeys said: “In the face of such an overwhelming natural disaster, it is not surprising that there has been a collapse in travel bookings.  One can only feel enormous sympathy for Indonesia and for the people of Lombok.”