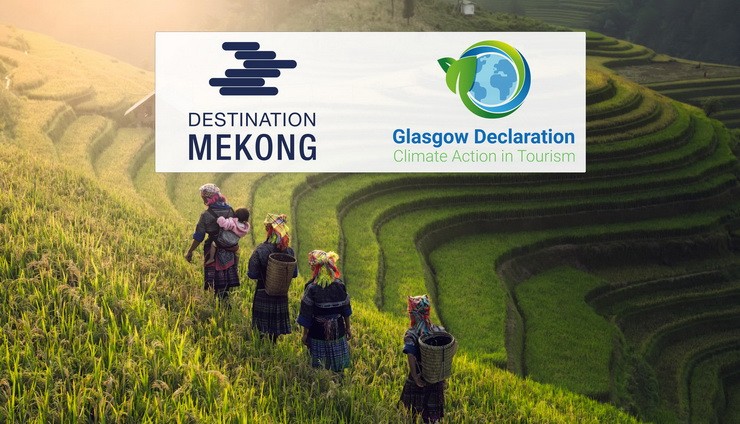 As part of its efforts to play a leadership role in the global tourism community, Destination Mekong became a signatory and launch partner of the Glasgow Declaration on climate Action in Tourism.

Destination Mekong became a proud signatory of the Glasgow Declaration on Climate Action in Tourism at the COP26.

As part of its efforts to play a leadership role in the global tourism community, Destination Mekong became a signatory and launch partner of the Glasgow Declaration on climate Action in Tourism, which was launched on 4 November 2021 during the UN Climate Change Conference (COP26).

The Glasgow Declaration on Climate Action in Tourism unites travel and tourism behind a common set of pathways for climate action, aligning the sector with global commitments and catalyzing collaborative solutions to the many challenges facing businesses and destinations globally.

The Glasgow Declaration encourages the acceleration of climate action in tourism by securing commitments to reduce emissions in tourism by at least 50% over the next decade and achieve Net Zero as soon as possible before 2050.

As a signatory of the Glasgow Declaration on Climate Action in Tourism, Destination Mekong has committed to aligning its actions with the latest scientific recommendations to ensure its approach remains consistent with a rise of no more than 1.5°C above pre-industrial levels by 2100. It also has agreed to deliver or update climate action plans within 12 months, align programs with the five pathways of the Declaration (Measure, Decarbonise, Regenerate, Collaborate, Finance), report publicly on an annual basis, and work in a collaborative spirit, sharing good practices and solutions, and disseminating information

“More than ever, the global tourism industry has a unique opportunity to demonstrate its transformative power through inspiring and driving climate action. It’s not only an emergency but also a matter of human dignity.” Catherine Germier-Hamel, CEO, Destination Mekong

The Glasgow Declaration on Climate Action in Tourism brings together the latest research and global expertise to galvanize climate action. It will be hosted within the One Planet Sustainable Tourism Programme’s website, supported by Recommended Actions for tourism stakeholders across the world to consider as part of their action planning, alongside other resources. As the declaration states: “A just transition to Net Zero before 2050 will only be possible if tourism’s recovery accelerates the adoption of sustainable consumption and production, and redefines our future success to consider not only economic value but rather the regeneration of ecosystems, biodiversity, and communities.”

The need for a globally consistent approach for climate action in tourism has been made clear, notably through research into CO2 emissions carried out by UNWTO/ITF and released at the UNFCCC COP25 in December 2019. This showed that transport-related emissions from tourism were forecast to increase by 25% by 2030 from 2016 levels, against the current ambition scenario.

As the global tourism industry is slowly getting back on track, Destination Mekong (DM) has recently appointed a new Executive Team composed of Catherine Germier-Hamel as CEO, Gerrit Kruger as Chief Marketing Officer, Gavin Bell as Chief Development Officer, and Jens Uwe Parkitny as a strategic advisor, in an honorary capacity, effective 1 November.

This ‘dream team’ was formed by Jens Thraenhart, Founder of Destination Mekong and former Executive Director of the Mekong Tourism Coordinating Office (MTCO), before starting a new career as CEO of Barbados Tourism Marketing Inc.