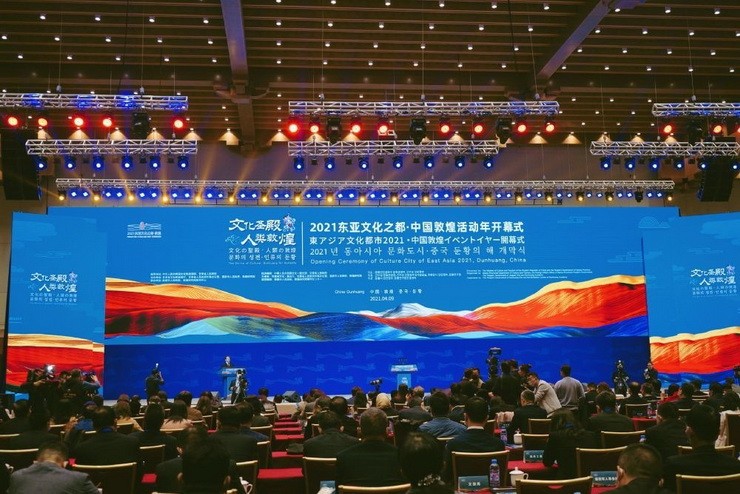 "East Asia Capital of Culture" is an important measure to implement the consensus reached at the trilateral leaders' meeting and has become a flagship brand for cultural exchanges among the three countries.

Dunhuang, China - Over 20 activities highlighting a major historic and cultural landmark on the ancient Silk Road were unveiled at the opening ceremony of Culture Cities of East Asia 2021 on April 9 in Dunhuang, northwest China's Gansu Province. The opening ceremony was part of a year-round cultural exchange initiative between China, Japan, and the Republic of Korea (ROK).

"East Asia Capital of Culture" is an important measure to implement the consensus reached at the trilateral leaders' meeting and has become a flagship brand for cultural exchanges among the three countries, said Zhang Xu, Chinese Vice Minister of Culture and Tourism at the ceremony.

In 2020, Shaoxing and Dunhuang in China, Kitakyushu in Japan, and Sunchon in the ROK were designated as the Culture Cities of East Asia 2021.

Gansu will work with other culture cities of east Asia, upholding the spirit of "peace and cooperation, openness and inclusiveness, mutual learning and mutual benefit" to promote regional development and world peace, said Gansu Vice Governor He Wei.

Shimizu Fumio, Japan's Envoy Extraordinary and Minister Plenipotentiary in China, said he expects the cities of Culture Cities of East Asia to carry out a variety of cultural exchanges activities to make new contributions in promoting mutual understanding among the three countries.

Kim Byungkwun, the Consul General of the ROK in Xi'an, China,  said this year's Culture Cities of East Asia uphold the valued concept of respecting the cultural diversity of China, Japan, and the ROK while promoting cultural development.

Dunhuang played a key role in Silk Road history, and influenced China's East Asian neighbors' culture and history. The Temple of the Flourishing Law (Hōryū-ji), a Buddhist temple in Japan's Nara Prefecture, was adorned with Buddhist murals styled after the Dunhuang murals in China. There are also poems in the Dunhuang Manuscripts describing the visit of a prince from Silla named Kim Gyo-gak, who became interested in Buddhism when visiting China during the Tang Dynasty. Since the 1950s, Dunhuang art has been exhibited in Japan and the ROK many times. The three countries have maintained exchanges and cooperation in cultural relic protection technology and talent training.