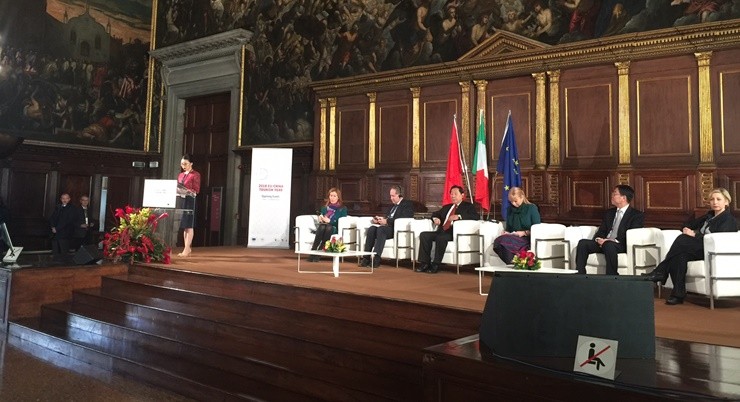 Ctrip will work together with the European Travel Commission (ETC) in destination marketing and growth as well as effectively contributing to cultural development and flows of travel between China and Europe.

In July 2016, Chinese Premier Li Keqiang and President of the European Commission, Jean-Claude Juncker jointly announced that 2018 will be" China-EU Tourism Year." Since 2017, Ctrip has reached strategic cooperation agreements with dozens of European destinations such as Ireland, Portugal, Spain and Austria. At present, Ctrip's overseas one-stop travel service has covered all European countries from the Mediterranean to Scandinavia. Ms Jenna Qian, CEO of Ctrip's Destination Marketing and the European Travel Commission (ETC) signed the strategic cooperation agreement during the opening ceremony. In addition to Ctrip's speech on how to produce and promote one-stop travel services and panel discussions, Ctrip and China Tourism Academy (CTA) also released their joint report on the 2017 China-Europe Tourism Market.

Jenna Qian, CEO of Ctrip's Destination Marketing, said, "Ctrip's destination marketing has partnered with more than 300 global destinations. Based on big data, we are able to analyse user behaviour and provide them with personalized travel products and services. We will provide a better promotion and communication platform for China and Europe."

Ms Qian noted that as European destinations are promoted and the continent becomes more acquainted with Chinese tourist behaviors, this will also help to push Chinese cities abroad. She said, "Ctrip will become a bridge between China and the West and will support the development of distinctive tourism products and services for One Belt One Road countries."

With more than 300 million registered members from which 25 million are foreigners, Ctrip plays a leading role as the largest online travel agent in China and the second largest in the world. From first purchasing Europe's meta search Skyscanner at the end of 2016 for US$1.7 billion to agreements with various travel partners, Ctrip will work together with the European Travel Commission (ETC) in destination marketing and growth as well as effectively contributing to cultural development and flows of travel between China and Europe.

Ever since the signing of the ADS agreement, tourism exchanges between China and Europe has seen consecutive growth. In 2017, Chinese citizens visiting Europe exceeded 6 million for the first time.46% are from Eastern China with Shanghai, Beijing, Guangzhou and Shenzhen being top departure cities. According to Ctrip's airline ticket sales data, Europe is the second most popular destination for Chinese outbound tourists after Asia. Europe also saw a year on year growth of 26.3%.

While France, Italy, Spain and Germany remain top choices for Chinese travelers, countries such as Czech Republic, Finland, Iceland and Norway are also becoming increasingly popular. With strong preferences for self-coordinated and personalized tours, Chinese travellers are more willing to spend money on new and unique experiences. Females travel more than their male counterparts and 30 to 40 year olds are the main force of European tourism. With higher income and purchasing powers, this age group has the greatest demand for high-quality travel services and comfortable experiences.

Ctrip's CEO of Destination Marketing Jenna Qian said, "Seizing the opportunity of the China-Europe Tourism Year, we look forward to more tourism cooperation and exchanges between China and Europe. With the largest user base and a deep understanding of Chinese travelers, we are able to provide European destinations and partners with the most effective marketing and product strategies and solutions, and as a result, better serve our users."