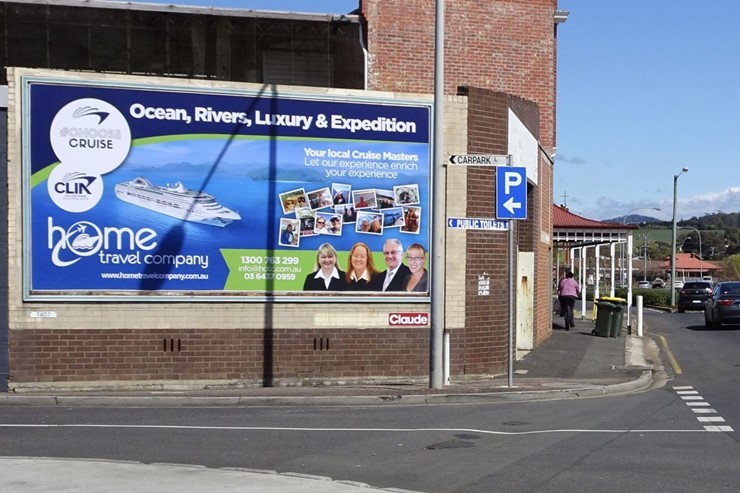 Home Travel Company in Tasmania was awarded the major prize of a three-day Halong Bay cruise with Heritage Line after the agency got creative with a #ChooseCruise billboard.

With more Australian and New Zealand agencies getting involved in the annual campaign each year, CLIA Australasia & Asia Managing Director Joel Katz said it was getting harder to pick a winner.

“There has been an overwhelming response from agents taking part in our #ChooseCruise campaign this year. It’s exciting to see all the different ways that CLIA travel agents are using their social media accounts and websites, as well as advertising and editorial, to promote all that is fabulous about cruising,” Mr Katz said.

After another week of great cruise promotions, Mr Katz said Home Travel Company in Tasmania was awarded the major prize of a three-day Halong Bay cruise with Heritage Line after the agency got creative with a #ChooseCruise billboard.

With the tagline ‘Let Our Experience Enrich Your Experience’, Home Travel Company owner Robyn Sinfield said the outdoor advertisement was all about highlighting her team’s cruise experience.

“We used pictures of our staff enjoying cruises around the world to show that our team has first-hand experience and vast knowledge of an array of cruise holidays, while also highlighting those members of our team who are CLIA Masters and CLIA accredited to underline our cruise credentials. We are thrilled to have won this prize,” Robyn said.

“Winning a ticket to Cruise360 is a great pat on the back and offers a valuable opportunity for a member of our team to attend CLIA’s cruise conference and keep up-to-date with the latest from the cruise industry.”

To reward their efforts throughout the #ChooseCruise promotion, CLIA Australasia will offer weekly prizes to CLIA travel agents who get behind the campaign.

This week (October 16-22) the spotlight is on luxury cruising as a great value way to indulge in high end experiences, with expedition cruising to be promoted in the final week.

The prizes on offer during luxury cruise week include a dining experience on Ponant’s Le Laperouse during a visit to Sydney in February and a $500 Breakaway Voucher.

During October every year, CLIA offices around the world raise awareness of cruising as a great value, easy, fun and memorable holiday for people from all walks of life, and encourage travellers to visit a CLIA travel agent and book a cruise.