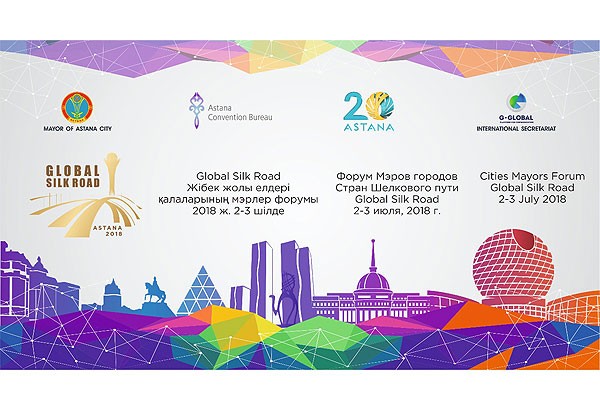 As of today, more than 2,000 participants from more than 60 countries have been registered, including 70 mayors from the Silk Road countries, 30 political leaders, 200 large chambers of commerce and industry and transnational companies of the world, more than 150 foreign speakers and moderators.

The Cities Mayors Forum “Global Silk Road” will take place on 2-3 July, 2018 in Astana. Participants will discuss the program "Belt and Way", which proposes the development of new mechanisms for regional economic partnership, stimulation of economic prosperity of the countries involved, strengthening of cultural exchanges and relations in all areas, as well as the promotion of peace and sustainable development.

As of today, more than 2,000 participants from more than 60 countries have been registered, including 70 mayors from the Silk Road countries, 30 political leaders, 200 large chambers of commerce and industry and transnational companies of the world, more than 150 foreign speakers and moderators. In particular, the mayors of such mega-cities as London, Bangkok, Sydney and others confirmed their participation.

The headliner of the event will be a special participant - the Sophia gynoid, developed by the Hong Kong Company Hanson Robotics. This robot has skills to adapt to human behavior and communicating with people and is a popular guest at various international events. Since October 2017, Sophia has been granted citizenship of Saudi Arabia and the first robot, which acquired the citizenship of any country.

Also within the framework of the event, there will be a friendly football match between the national team of mayors and governors and the world team - veterans of football.

Based on the results of the Forum, it is planned to establish a Club of Cities Mayors, the Association of Businessmen, Universities, Journalists, Poets of the Silk Road Countries, as well as a platform of women's and youth organizations.

The laying of the foundation of the architectural complex "Golden Bridge of the Silk Road" will be historic event, as a symbol of friendship from the world-famous Chinese art figure Shu Yun. The length of the bridge is 28 meters. Sculpture symbolizes the dream of creating a global community with a common destiny, common interests and shared responsibility.

Shu Yun made national flowers of silk of countries located along the "Belt and Way" and placed them in bricks of artificial amber from which the "Golden Bridge of the Silk Road" was built in the image of the famous Chinese bridge in Zhaozhou.

This work was previously presented at the Milan EXPO-2015, in 2017 it was selected for the Forum of International Cooperation "Belt and Way" in Beijingand demonstrated at other important events.