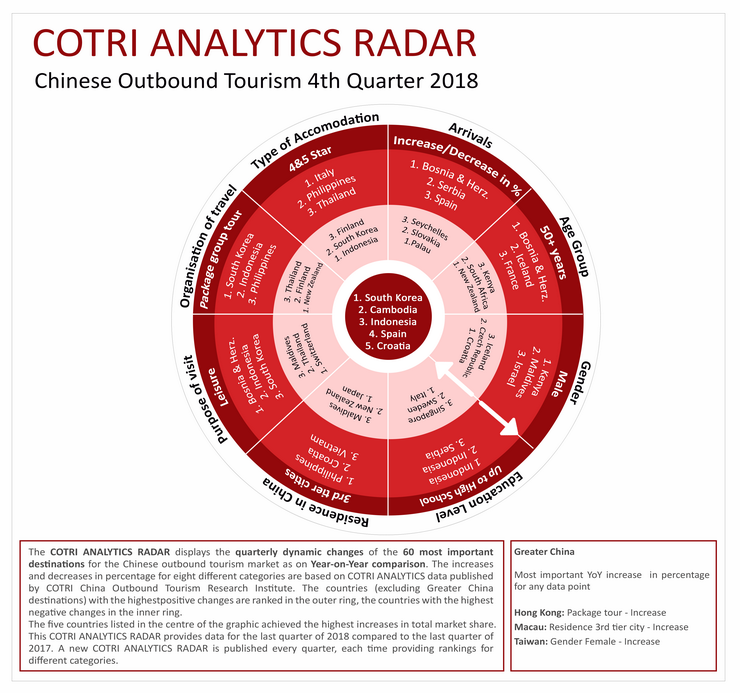 New quarterly statistics, published by COTRI ANALYTICS of the German-based China Outbound Tourism Research Institute on Feb. 26th, 2019, show that 56% or 22.5 million of the 40 million outbound trips from Mainland China in the last quarter of 2018 ended already in Hong Kong, Macau or Taiwan.

The number of border crossings from Mainland China increased in the last quarter of 2018 by 7%, but this growth only benefitted the destinations of “Greater China”. The rest of the world welcomed for the first time in a last quarter of the year less Chinese visitors compared to the year before.

New quarterly statistics, published by COTRI ANALYTICS of the German-based China Outbound Tourism Research Institute on Feb. 26th, 2019, show that 56% or 22.5 million of the 40 million outbound trips from Mainland China in the last quarter of 2018 ended already in Hong Kong, Macau or Taiwan. Only 44% or 17.5 million brought Chinese travellers to destinations further afield. In 2017 the ratio had still been 50:50 between Greater China trips and trips to the rest of the world, in the years before the balance used to be even in favour of longer travels. The last quarter includes the National Golden Week in October, one of the main travel seasons in China. Especially the Special Administrative Regions Hong Kong and Macau managed to add five million arrivals from China in the last quarter within the last two years, whereas the rest of the world lost one million arrivals in the same period.

China is the world’s biggest international tourism source market and for most destinations in East Asia and Oceania the No. 1 source market. For many countries in other parts of the world China represents the No. 1 Asian source market. Different destinations have been hit in different ways by the slump. Whereas many traditional destinations like Australia, Germany, or Thailand saw little growth or even decline, others enjoyed growing arrival numbers and increasing market shares, especially Nepal, South Korea and Cambodia in Asia and many smaller destinations like Serbia, Croatia and Spain in Europe as well as Canada in North America.

Prof. Dr. Wolfgang Georg Arlt, director of COTRI: “Chinese are still travelling abroad in growing numbers, but the lower end of the market has become a little bit more cautious, choosing rather destinations close by, including Hong Kong and Macau, whereas the upper end of the market is looking for more authentic experiences in new destinations. Simplified visa regulations, increased numbers of direct air connections and the new road and rail links between Hong Kong, Macau and China support this new travel pattern. Long-distance destinations will have to increase their efforts to attract Chinese visitors.”

COTRI ANALYTICS provides detailed statistical information for the 80 most important destinations of Chinese outbound travellers. It publishes every quarter the COTRI ANALYTICS RADAR, showing which countries outside of Greater China had the biggest increases or declines in market segments according to age, gender, purpose of visit, form of travel etc. and in market share.