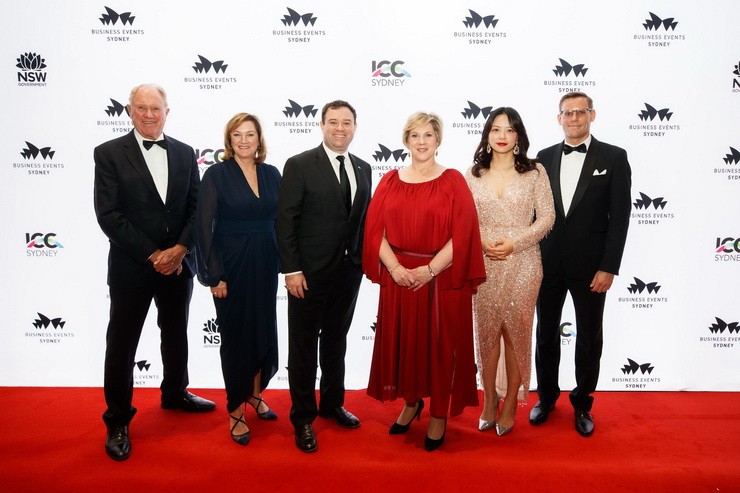 This year’s theme was ‘Dare to Rise: Building Sydney and Australia back best.

Nine new Global Ambassadors were welcomed to the prestigious roster of leaders of industry and academia spanning medical research, technology, creative industries, engineering, business and science; and whose innovation, strong international networks and insights will contribute to BESydney’s work to secure global meetings for Sydney and Australia.

Incoming Patron of the Global Ambassador Program, The Hon Dominic Perrottet MP, Premier of New South Wales (NSW), paid tribute to the Ambassadors and said, “On behalf of the State, BESydney secures global and domestic meetings that deliver remarkable economic and social benefit for New South Wales. These meetings generate significant direct expenditure and – by strategically aligning its work with the priorities of Government, academia, and industry – BESydney plays a vital role fostering innovation, developing our knowledge economy and key industries, attracting global talent, and enriching our communities.”

“BESydney Global Ambassadors will play a vital role to ensure that Sydney and NSW build back best, creating legacies that will benefit our communities and the world, for both current and future generations.”

NSW Minister for Enterprise, Investment and Trade, Tourism and Sport, and Western Sydney, The Hon Stuart Ayres, said “In a post-Covid world, it has never been more important to have highly talented individuals promoting Sydney and NSW on the world stage.  The gathering of BESydney’s Global Ambassadors last night and then the induction of new ambassadors shows that ‘Team Sydney’ is growing and going from strength to strength.”

An established highlight of the Ambassador Dinner program, this year’s Australia Oration was delivered by Robyn Denholm – Chair of Tesla and Chair of Tech Council of Australia, who shared her vision for Sydney as it stands at the precipice of realising a truly great and globally unique tech offering.

“We want Sydney to be a magnet for talent and investment attraction. Where once Silicon Valley was awash with Aussie accents making their mark, they are now coming home or choosing to never leave in the first place…and for good reason.

“Sydney has a once in a generation opportunity to become a tech powerhouse on the world stage and my personal ambition for Sydney and Australia is to realise this opportunity,” she said.

The MC for the evening was Global Ambassador and Non-Executive Director, Sally Loane who also moderated an in-conversation session with Sarah Liu, Founder and Managing Director of The Dream Collective and Dr Ludwik Kranz a UNSW Research Fellow specialising in nanotechnology, quantum technologies and atomic-scale engineering, who works with Silicon Quantum Computing and the ARC Centre for Quantum Computation and Communication Technology.

The Ambassador Dinner brought together 280 members of the BESydney community, including the nine new Ambassadors who were formally invested this year:

BESydney CEO, Lyn Lewis-Smith said, “The past two years have been challenging and have allowed us to review our strategy and plans for the future. I’d like to acknowledge the NSW Government’s support of our vision, and engagement to – position Sydney as a premier international business event destination and a global powerhouse.”

Lewis-Smith continued, “The delivery of the 2022 Ambassador Dinner is the centrepiece event of the year to celebrate our Global Ambassadors and supporters. Our Global Ambassadors are people with the power to shape the future, who share our ambitions and work with us to secure significant global meetings for NSW. They are among the world’s boldest and brightest thought leaders and industry influencers, and BESydney’s greatest assets, and we thank them for all they do.”