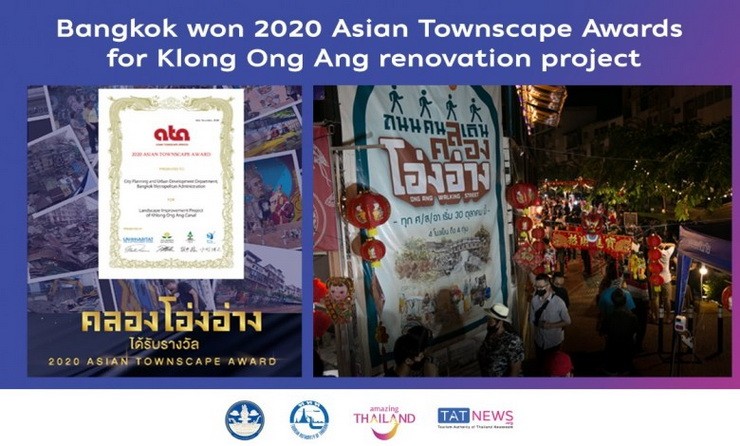 Thailand is one of six countries that won the award from the UN-Habitat Regional Office for Asia and the Pacific.

Bangkok Governor, Pol. General Aswin Kwanmuang, announced on his personal Facebook page (@aswinkwanmuang) that the Klong Ong Ang renovation project was awarded the 2020 Asian Townscape Awards from UN-Habitat Fukuoka, making Thailand one of six countries that were chosen for the landscape improvement project.

Governor Aswin also invited all to visit the Klong Ong Ang Walking Street, which takes place every Friday, Saturday, and Sunday from 16.00-22.00 Hrs. As well as lots of food and goods, the walking street features charming street art along both sides of the canal, from Damrong Sathit Bridge to Saphan Han Bridge plus live music, other performances and kayaking activities.

Hosted by the UN-Habitat Regional Office for Asia and the Pacific, in cooperation with the Fukuoka Asian Urban Research Centre, Asian Habitat Society, and Asia Townscape Design Society, the 2020 Asian Townscape Awards are designed to honour cities, regions, projects, etc. that have played a significant role as models in landscape construction for the purpose of materialising a living environment that is happy and fulfilling to the people of Asia.

“Landscape is a visible form of environment where the people’s daily lives evolve around and consist of various natural, visible, conceptual elements; such as, mountains, rivers, greenery, urban space, buildings, local culture and the activities of the people who live in and around them,” according to the 2020 Asian Townscape Awards: Call for Applications document.