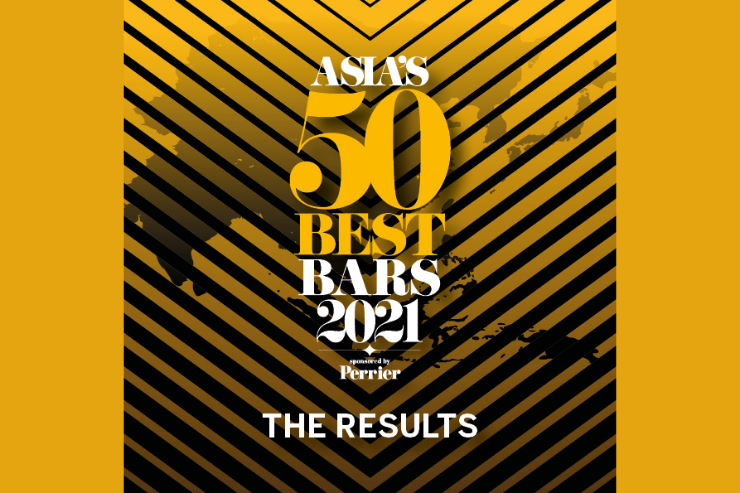 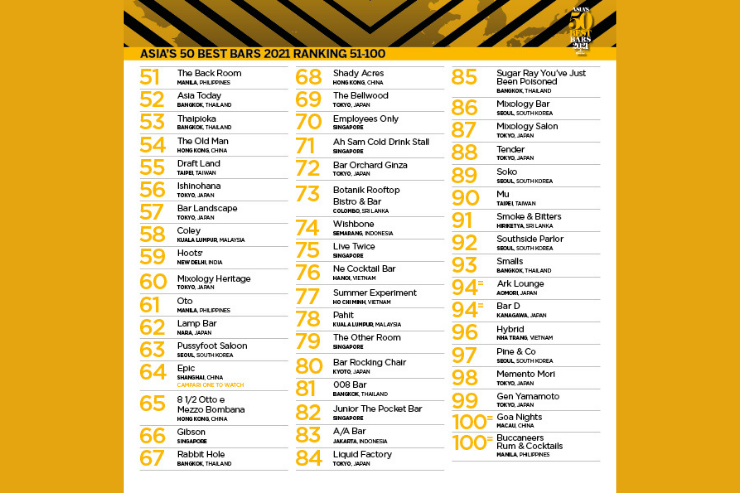 Singapore – With one week to go before the announcement of Asia’s 50 Best Bars 2021, sponsored by Perrier, 50 Best has revealed the bars voted onto the extended list for the first time. The ranking is created from the overall Asia’s 50 Best Bars voting process and comes as part of 50 Best’s overall strategy to recognise a greater number of hospitality establishments as they seek to emerge from restrictions imposed by the pandemic.

Mark Sansom, Content Editor for Asia’s 50 Best Bars, says: “The last year has been devastating for hospitality and it is vital that we support as many businesses as possible at part of their recovery. In a historic first for the Asia’s 50 Best Bars awards programme, the extended ranking is designed to shine the spotlight on more bars than ever before. As guests begin planning their next bar experiences, this extended list will provide double the choice of exceptional, expert-approved drinking destinations for the months and years ahead.”

Japan dominates the 51-100 list with 14 bars featured. New entry Ishinohana in Tokyo places ahead of the pack at No.56, while the other nine bars from Tokyo on the list this year include Bar Landscape at No.57, Mixology Heritage at No.60, The Bellwood at No.69, Bar Orchard Ginza at No.72, Liquid Factory at No.84, Mixology Salon at No.87, Tender at No.88, Memento Mori at No.98, and Gen Yamamoto at No.99. From Nara, Lamp Bar is awarded the No.62 spot, while Kyoto’s Bar Rocking Chair is placed No.80. Two bars from Japan are also tied at No.94 – Ark Lounge from Aomori and Bar D from Kanagawa.

Singapore’s bars secure six spots on the list including three newcomers – Ah Sam Cold Drink Stall at No.71, Live Twice at No.75 and Junior The Pocket Bar at No.82. Gibson by the Jigger & Pony Group is at No.66, Employees Only at No.70 and The Other Room at No.79.

Thailand is represented by six bars including four new entries for Bangkok – Niks Anuman’s Asia Today at No.52, Thaipioka at No.53, 008 Bar at No.81 and Sugar Ray You’ve Just Been Poisoned at No.85. Rabbit Hole ranks at No.67 and Smalls comes in at No.93.

China boasts five entries on the extended list: Shanghai’s Epic is a new entry at No.64 and is named the Campari One To Watch. The Old Man Hong Kong is at No.54, 8 1/2 Otto e Mezzo Bombana and Shady Acres, both from Hong Kong, placed at No.65 and No.68 respectively, while Macau’s Goa Nights rounds off at No.100.

Sri Lanka and Vietnam each make their first appearance on the list this year, with two bars from the former: Botanik Rooftop Bistro & Bar in Colombo at No.73 and Smoke & Bitters in Hiriketiya at No.91. Vietnam grabs three entries: Ne Cocktail Bar in Hanoi at No.76, Summer Experiment in Ho Chi Minh at No.77, and Hybrid in Nha Trang at No.96.

Manila leads the way in the Philippines, led by The Back Room at No.51, Oto at No.61, and Buccaneers Rum & Cocktails at No.100. Two new bars from Indonesia break into the ranking – Wishbone from Semarang is placed No.74, while A/A Bar from Jakarta earns the No.83 spot. Other notable entries include New Delhi’s Hoots’ at No.59, Kuala Lumpur’s Pahit at No.78, and Taipei’s Mu at No.90. Mu is helmed by Bannie Kang, the winner of this year’s Mancino Bartenders’ Bartender Award.