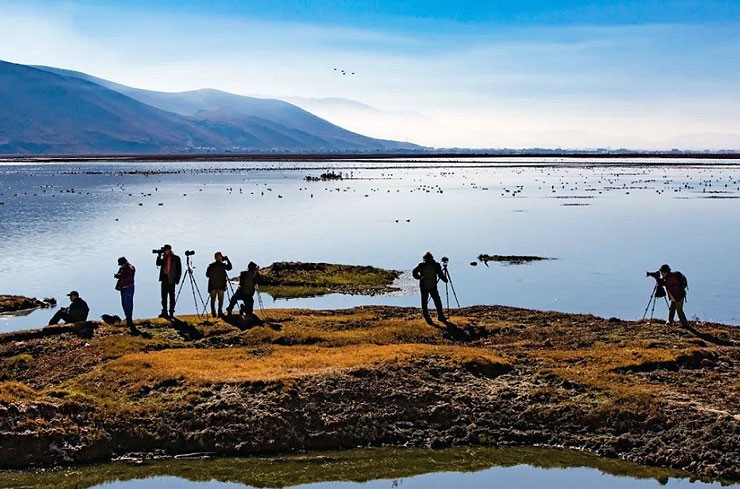 Leading the bird watching tours’ six-day long itinerary is Mr. Jiansheng Peng, Tibet’s most influential nature photographer. Peng is also Songtsam’s senior eco-tourism expert who is dedicated to promoting the harmonious coexistence between man and nature through natural images and high-quality eco-tourism. Under his guidance, Songtsam guests will have an opportunity to observe, learn about and photograph the many rare birds of Northwest Yunnan, including black-necked cranes, bar-headed geese, black storks and purple water chickens.

Northwest Yunnan is the main habitat for migratory birds in the winter, with its still sunny and mild climate. In Lijiang and Shangri-La, migratory birds arrive every winter. In Heqing Caohai and Lashihai near Lijiang, and the Napa Sea in Shangri-La, visitors will have the unique six-day opportunity to observe and learn about the more than 60 species and hundreds of thousands of migratory birds that stay there during the winter months.

Migratory Birds Live in Harmony with Local Villagers
The Yanggong River flows through Heqing Caohai and nourishes the natural grassy wetland of Lashihai, which is the first nature reserve named after a wetland in Yunnan. A well-protected plateau wetland system, Lashihai is home to more than 50 species of wetland birds! Local villagers have been farming around these lakes for many years, allowing the migratory birds here to live in harmony with both the locals as well as the visitors. This makes Heqing Caohai the most ideal place for close-up photography and observation of various wetland wildlife in China.

In addition to bird watching, tourists will also be able to visit traditional Tibetan villages that surround the Napa Sea and observe the local way of life with the cattle and horses roaming freely near huge highland barley stacks.

Rare Species of Birds in Yunnan:
The Black-necked crane
Regarded as a “sacred bird” by the Tibetans, it is also known as the “Fairy of the Plateau”. Black-necked cranes are the only cranes in the world that grow and breed on the plateau and can fly over Mount Everest, the highest peak of the world!

Purple Water Chickens
The largest population of purple water chickens in China can be found in the Heqing Caohai Wetland, with a total of more than 500 chickens. Except for their white undertails, the purple water chicken is almost completely blue and purple in color, and they often walk in the shallow water.