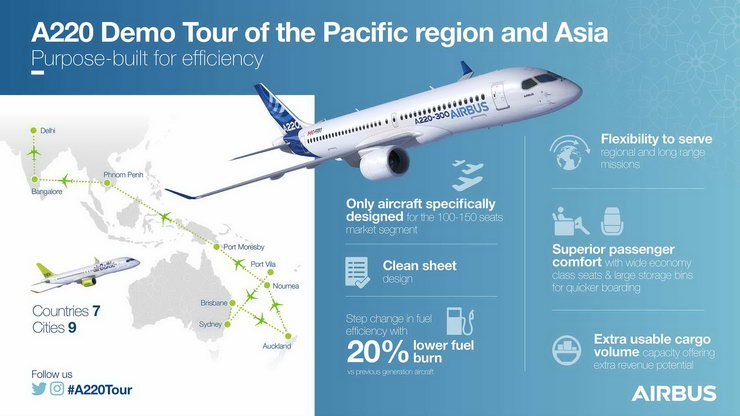 The A220 is the only new design aircraft in the 100-150 seat market and incorporates state-of-the-art technologies, the latest aerodynamic design and new generation engines.

Bangkok, Thailand - Airbus has launched an extensive tour of the Pacific region to showcase the A220, its latest family member. The aircraft being used for the tour is an A220-300 leased from Latvia’s airBaltic, which will visit nine destinations in seven countries. These will include three stops in Asia on the return journey to Europe.

The first stop of the tour will be the Pacific island nation of Vanuatu, home to the region’s A220 launch customer Air Vanuatu. The aircraft will then visit Australia (Sydney and Brisbane), New Zealand (Auckland), New Caledonia (Noumea) and Papua New Guinea (Port Moresby). On the way back to Europe, the aircraft will stop in Cambodia (Phnom Penh) and India (Bangalore and New Delhi).

Static displays are planned at each stop, as well as demonstration flights for airline executives and other invited guests.

The A220 is the only new design aircraft in the 100-150 seat market and incorporates state-of-the-art technologies, the latest aerodynamic design and new generation engines. Together, these advances generate fuel savings of at least 20 per cent compared with older generation aircraft of a similar size.

In addition, the A220 offers extended range capability of up to 3,400 nautical miles. This makes the aircraft especially suitable for the kind of operations seen in the Pacific region, including short to medium haul operations between the various island nations, as well as longer routes to Australia and New Zealand.

The airBaltic A220-300 is fitted with a single class passenger cabin with 145 seats. As on all A220 aircraft, the layout comprises three seats on one side of the aisle and two on the other. The cabin is the largest in its size category, with wider economy class seats and spacious overhead storage bins.