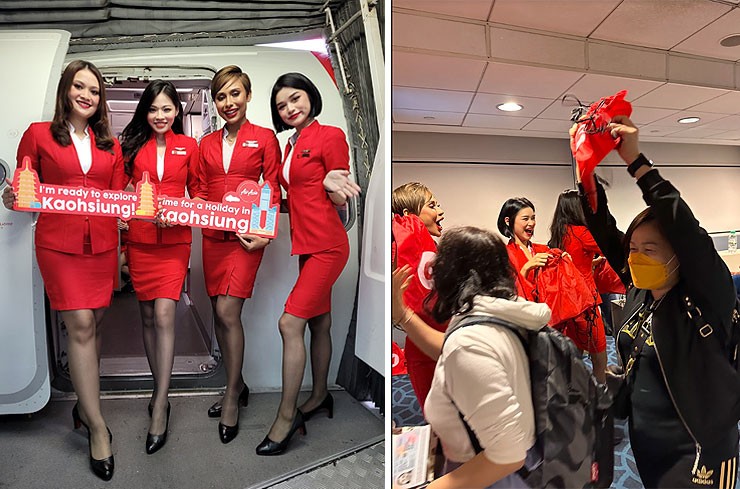 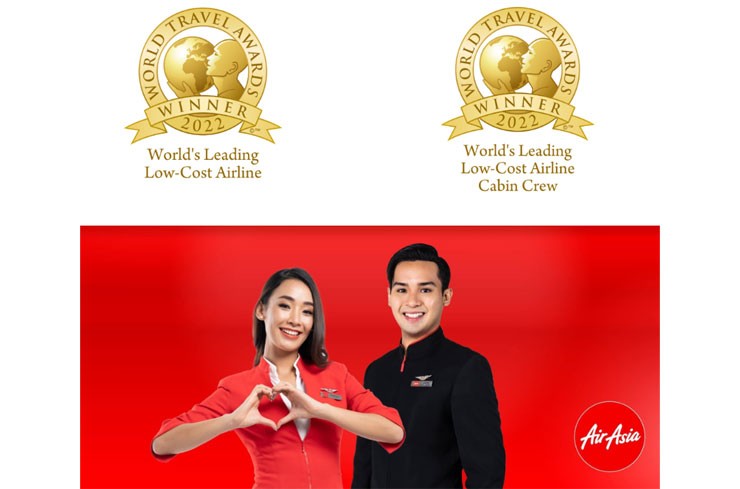 SEPANG - AirAsia celebrated its post-pandemic inaugural flight to Kaohshiung from Kuala Lumpur on 12 November 2022 after two long years of no air connectivity between the cities. Flight AK170 took off at 5:25PM local time, and arrived at 9:55PM local time in Kaohsiung with a healthy load factor of 114 guests onboard.

A grand send-off event was held at klia2 for the guests onboard the flight who received goodie bags filled with various airasia merchandise items  and an iPass each worth NTD50. Guests were also treated to a special performance by AirAsia’s talented Cabin Crew.

Riad Asmat, CEO of AirAsia Malaysia said: “This inaugural flight from Kuala Lumpur to Kaohsiung is a long-awaited occasion for us. Our Kaohshiung and Taipei routes were amongst our most popular and frequented by many since we commenced operations in the region in 2005.  It was a difficult decision to to halt our flights for over two years during the pandemic but it’s incredibly heartening to see our first flight take off and with so many excited guests onboard, ready to explore the wonders of the city.

“Now that travel restrictions have eased worldwide, we look forward to connecting more travellers to Kaohshiung and soon to Taipei when the flights resume in December 2022! Last week we celebrated having flown 700 million guests in our 21 years of flying and in conjunction with that, we’re treating our loyal guests to a number of amazing promos with some unbeatable deals to these cities. Grab yours and join us in the skies!”

Kaohsiung, famed for its picturesque harbour and sprawling landscape, is one of AirAsia’s most popular destinations in the North Asia region. Travellers to both destinations are spoiled for choice when it comes to tourism attractions. Furthermore both Kaohsiung and Taipei are often a preferred choice for travellers who are looking for affordable muslim-friendly food options. These two bustling cities are also home to a unique attraction ‒ free internet access is available throughout the cities with thousands of WiFi access points placed at various locations.

As of 13 October 2022, travel restrictions have been eased for the majority of international visitors to Kaohshiung and Taipei. Malaysians (as well as citizens from selected countries) can visit these cities without any visa, vaccinations, COVID-19 tests or quarantine requirements.

All additional seats are now available for booking on airasia Super App with a special promo fare exclusively for travellers to and from Hong Kong to enjoy a long-awaited getaway or  reunion with loved ones for the upcoming holiday season.

Guests can now fly to popular destinations in Southeast Asia with all-in one-way fare from as low as HKD672, or connect via AirAsia’s vast network throughout Asia to their favourite holiday destinations such as Penang, Kota Kinabalu, Chiang Mai, Phuket, Singapore, Bali and many more. The special promotion starts from today until 27 November 2022, with a travel period from 1 January until 30 April 2023.

Karen Chan, Group Chief Commercial Officer of AirAsia said: “Hong Kong is an integral part of our network and we are thrilled to be back offering affordable direct connectivity between Hong Kong and Southeast Asia once again.

“With Hong Kong relaxing entry restrictions by allowing quarantine-free travel for tourists from September this year combined with strong forecast demand, we are excited to welcome more  guests to and from Hong Kong with increased flight frequency ahead of the festive season and a special promotional fare as we usher in the New Year.

“We are also launching new services in the Greater China region and look forward to resuming more passenger flights direct to mainland China in the near future. “

As the AirAsia Group increases its services to Hong Kong, guests with AirAsia flight bookings to and from Hong Kong for the period up until 17 December 2022 will be able to change their flights at no charge via the airasia Super App and website. New flight dates can be selected up until 31 December 2022 providing greater flexibility and convenience.

The WTA celebrates excellence across key sectors of travel, tourism and hospitality. AirAsia was bestowed as the winner after garnering the most votes from industry players, consumers, media and travel professionals worldwide.

Bo Lingam, Group CEO of AirAsia Aviation Group Limited said: “We’re deeply humbled to be honoured with these wins once again after a tumultuous few years. AirAsia’s has always strived to put our guests first, and to ensure affordable connectivity without compromising on comfort and so winning World’s Leading Low Cost Airline and World’s Leading Low Cost Airline Cabin Crew for the 10th and 6th time in a row, respectively is certainly one of the main highlights of the year.

“It is a double celebration for us this week, as we mark a momentous milestone in the airline journey of having flown 700 million passengers since we first started 21 years ago. My sincerest gratitude goes out to WTA, industry players, our loyal guests who’ve supported us throughout this journey and not forgetting our dedicated Allstars.”

Suhaila Hassan, AirAsia Group Head of Cabin Crew said, “Winning these two awards is yet another monumental accomplishment for AirAsia, and further reinforces our testament of putting our guests first while prioritising quality travel. A well-deserved shoutout goes to our team of talented Cabin Crew who weathered the storm these last few years and still continue to uphold our value of excellent customer service. The team’s tireless efforts in always ensuring that our guests enjoy their flight journey with AirAsia is the reason we’ve garnered this recognition today. Thank you for making us proud! This humbling win only inspires us to strive harder to make 2023 an even better travel experience for our guests.”

Graham E. Cooke, Founder, World Travel Awards, said: “A hearty congratulations goes out to AirAsia for bagging ‘World’s Leading Low-Cost Airline 2022’ and ‘World’s Leading Low-Cost Airline Cabin Crew 2022’ ‒ yet further WTA victories for this pioneering airline. AirAsia’s continuous perseverance and resilience throughout these challenging few years have made these victories even more meaningful, and I look forward to seeing the team continue to soar.”

Established in 1993, the World Travel Awards is regarded as one of the most prestigious awards programmes in the global and tourism industry, acknowledges and celebrates excellence across key sectors of travel, tourism and hospitality.

In the spirit of celebrations - we partied it up in the air - AirAsia style! Commemorating 21 years of award-winning affordable connectivity, 700 million guests flown and the long-awaited resumption of international travel, AirAsia hosted its first ever party in the air! Flight AK378 enroute to Bali yesterday took off in style - with a special guest performance by DJ Bate and Airliftz. The talented group comprising Ethan Curzon and Yeoh Wai Hong as BATE and Alif Aolani a.k.a Airliftz have been making waves in the local music industry over recent times. The trio belted out fan-favourite hip hop beats and serenaded the excited guests onboard with some of their famous hits.

Airlftz was brought to the attention of Red Records - AirAsia’s record label, after featuring in its TimeToListen inclusion and diversity campaign. RedRecords is a joint venture with Universal music dedicated to developing the best of ASEAN talent. Since then, Airlftz has released 3 new Singles, received 2 sponsorship deals with Adidas and Colgate and has been performing all over Malaysia. 2023 is going to be massive for this amazing talent!!!!

Before the festivities began, the team played a fun Q&A game with the guests - with the main winner bagging a pair of flight tickets to their destination of choice. Colin Currie, Capital A’s President (Commercial) bestowed the elated winner with a pair of tickets to one of AirAsia’s newly resumed destinations - the beautiful New Zealand. This momentous event marked another milestone in history for AirAsia - being the first airline in Asean to host a party in the clouds. 2022 has been incredible to AirAsia, and we’re so proud! Here’s to an even livelier and memorable 2023.