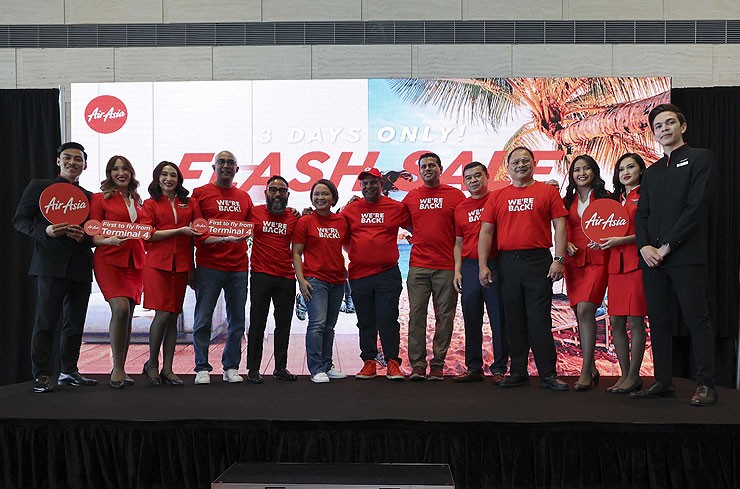 Flights to and from Singapore are currently operated by four airlines in the group; AirAsia Malaysia (AK), AirAsia Indonesia (QZ), AirAsia Thailand (FD) and AirAsia Philippines (Z2), connecting a total of 168 flights weekly to 12 destinations across Asean.

The first AirAsia flight touched down at T4 on September 15th from Kuala Lumpur at 8:30am local time (flight number AK703) on the spacious widebody Airbus A330 aircraft with a full load factor of 100%. The return flight AK702 departed from Singapore T4 en route to Kuala Lumpur at 9:10am local time.

As the largest foreign airline group by capacity in Singapore, AirAsia accounts for more than one in eight of the total number of passengers through Changi Airport terminals. Pre-pandemic, AirAsia contributed to 51% of T4’s overall seat capacity. The return to T4 will provide opportunities for AirAsia airlines to add more services to meet strong demand and importantly, enable them to return to a full recovery to pre-Covid-19 frequency levels in the near future.

Flights to and from Singapore are currently operated by four airlines in the group; AirAsia Malaysia (AK), AirAsia Indonesia (QZ), AirAsia Thailand (FD) and AirAsia Philippines (Z2), connecting a total of 168 flights weekly to 12 destinations across Asean. This weekly frequency is currently about 60% of the airlines’ operations at T4 pre-Covid with plans to recover up to  96% against pre-pandemic by the year's end.

Tony Fernandes, CEO of Capital A said: “Not only are we thrilled to be back flying - today we are just as excited to be back at T4. As our third-largest hub, Singapore is an integral market for us. From starting out with just two daily flights in 2008 we increased services significantly to 281 weekly flights pre-pandemic to meet huge demand for affordable travel in the region.

“We are proud to have contributed to the industry's growth and to have played a pivotal role in making the Kuala Lumpur-Singapore route one of the busiest in the world.

“Currently, we are operating 168 flights weekly to 12 destinations across Asean which is about 60% of our pre-Covid-19 flying. By the end of the year, I’m hopeful we will get to nearly 100% with more flights and the use of more, larger A330 widebody aircraft.

“Returning to this state-of-the-art fully automated terminal is a bit like coming home as we actively participated in the consultation and sharing of ideas in the design and functionality of T4. The digitalisation of passengers' airport experience is now more important than ever, which is very much in sync with our operations and model, supporting our focus on innovation and efficiency.

“With the international travel rebound, no travel restrictions into Singapore and the move to T4, we are optimistic that we will see our pre-pandemic passenger numbers up again soon and foresee continued solid growth in our cargo and logistics operations in the region. With our expansive network spanning South East Asia and Asia Pacific, coupled with a relatively strong Singapore dollar, we expect to see a surge in travel demand to Malaysia, as well as Thailand, Philippines, Indonesia, India and beyond - especially with our fly for just one Singapore dollar sale on today!”

Bo Lingam, Group CEO of AAAGL said: “It’s great to be back. As the first terminal at Changi Airport with an end-to-end Fast and Seamless Travel (FAST) system, the improved efficiencies align perfectly with our quest to maintain the lowest cost structure and deliver on our vision of contactless and seamless travel. It also means that we can pass the savings to our guests and generate more traffic through Changi. In 2019, we carried 4.5 million guests and operated 12 aircraft to/from Singapore and we look forward to continued expansion of our services to return to that level or even more in the future.

“We foresee our aviation business performance will continue to improve across all key metrics in the near term as the world continues to reopen with fewer restrictions. We could not be more pleased to work closely with CAG to reach our pre-pandemic levels on our core routes which we expect by or before the second quarter of 2023.”