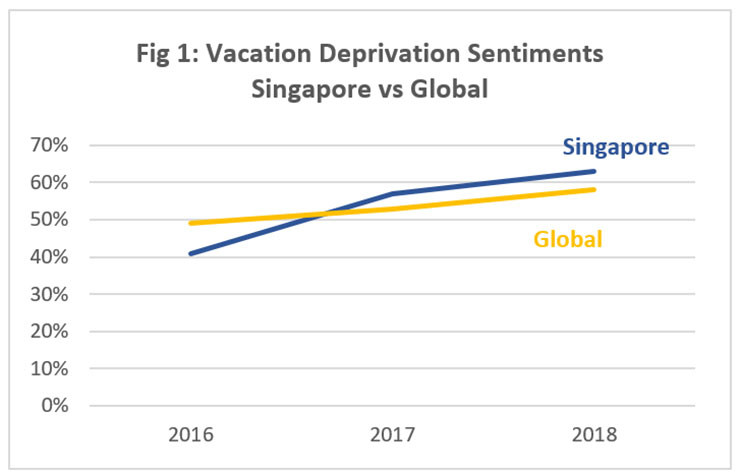 These findings were uncovered by Brand Expedia’s 2018 Vacation Deprivation Study, which also found that more Singaporeans are deprived of vacations compared to the year before, with 77 percent expressing a willingness to take a pay cut for an extra day of vacation.

The Brand Expedia 2018 Vacation Deprivation Study, which was conducted with 11,000 full-time working adults across 19 markets, including 300 respondents in Singapore, also uncovered full-time workers’ sentiments on whether the number of vacation days they receive is adequate for today’s working environment. Almost nine in 10 (88%) Singaporeans felt that they deserve more vacation days in 2018 – up from the 76% who felt the same in 2017. Additionally, 77% of Singapore workers even expressed a willingness to take a pay cut for one extra day of vacation.

“In a dynamic, fast-paced society like Singapore, it came as no surprise that workers want more annual leave to go on vacations. Taking regular, quality vacations is known to provide numerous positive benefits to the personal and professional well-being of workers across the globe. As vacation deprivation continues to rise in Singapore, it is now more important than ever for business leaders to identify the reasons behind these sentiments in order to foster an enabling culture for employees to take quality time off and make the most of their vacation time, for the good of their personal and professional well-being in the long run,” said Lavinia Rajaram, Head of Communications, Asia Pacific, Brand Expedia. 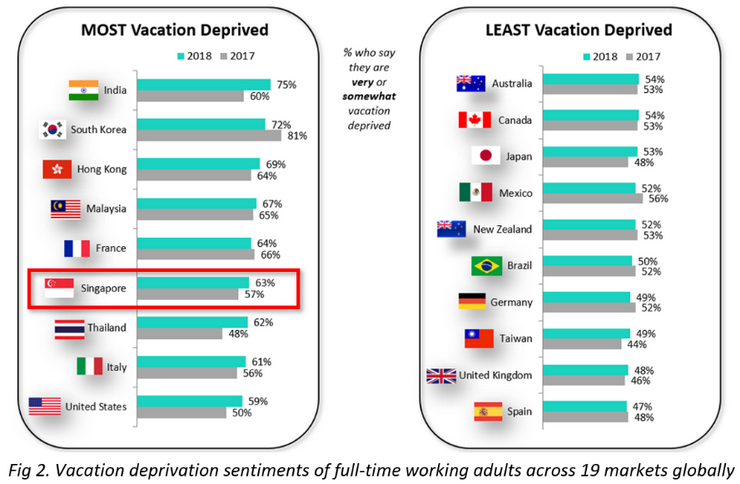 Singapore Ranked the Sixth Most Vacation-Deprived Market in the World

Singaporeans Remain Connected to Work Even During Vacations

Looking at the vacation behaviours of full-time workers in Singapore, the Study found that half of the Singaporean workers surveyed take fewer days of annual leave than the amount that they receive in a year. When asked about the reasons for not taking time off for a holiday, being unable to get time off work emerged as the top reason for doing so among 39% of Singaporeans - the highest in the world. This was followed by reasons such as the desire to save up time for a long holiday (30%) and being unable to afford a holiday (22%).

Even when Singaporeans go on holidays, more than half (53%) admitted that they tend to stay connected to work during their vacation time, with 79% checking emails or voicemail at least once, out of which 27% do so at least once a day while on vacation. On top of that, Singaporeans also felt an expectation to be available constantly by their colleagues while on their break, with 30% saying that they are expected to be available constantly by their supervisors – the third highest percentage globally after India and Malaysia.

Vacations Continue to be Important for Workers’ Well-Being

In addition, respondents also agreed that vacations have a positive impact on their personal well-being:

As a more recent trend, findings from the Study indicated that Singaporeans are placing greater importance on their mental health. 70 percent of Singaporeans have taken at least one mental health day in the past year, the fifth highest percentage in the world after India (86 percent), Thailand (76 percent), Italy (75 percent) and Malaysia (74 percent). On average, Singaporeans took 3 mental health days last year and an additional 2.8 days on average for life administration.

“Going on vacations is a great way for workers to take a break from work and focus on improving their overall well-being for the long haul. At Expedia.com.sg, we take pride in helping people go places by simplifying the travel booking and planning processes. By taking the stress out of travel, this not only makes it easy for people to get away from the hustle and bustle of life, it also paves the way for workers to spend more quality time relaxing and recharging themselves,” added Rajaram.