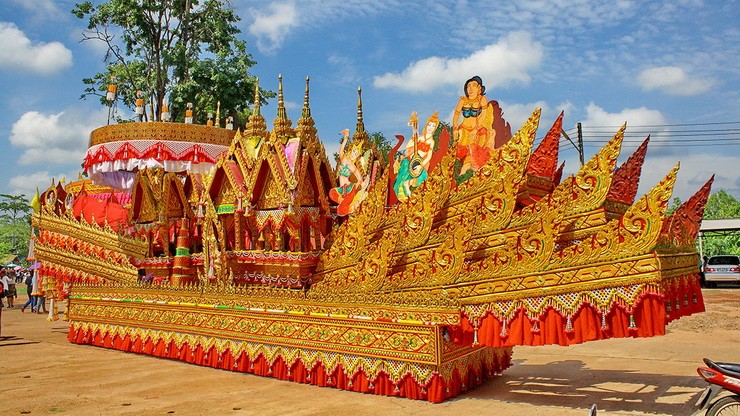 Scheduled for mid-May, the famous Northeast Thailand event is returning to Yasothon and Kalasin after 2 years with rocket launching, parades, and more on the programme.

Bangkok, Thailand – The Tourism Authority of Thailand (TAT) invites tourists to experience one of the must-see spectacles of the annual festival calendar – the exhilarating Bun Bung Fai Rocket Festival in the Northeastern Thai provinces of Yasothon from 13-15 May and in Kalasin from 21-22 May.

The annual rocket festival, which takes place in the Northeast as the rainy season begins, is seen as a way of encouraging the rains to fall and helping the local rice crops to grow. It also allows people to have a fun and festive break before the hard work of planting and harvesting begins.

The celebrations differ from province to province, but mostly involve the firing of homemade rockets up into the sky with teams competing against each other to send their rockets the highest – some up to hundreds of feet. There are different types of rockets classified by the weight of gunpowder they carry. ‘Bung Fai Kilo’ indicates a rocket has 1 kg of gunpowder, ‘Bung Fai Muen’ is 12 kg, and ‘Bung Fai Saen’ is 120 kg. There are also parades with floats and displays of traditional costumes and folk dancing.

The Festival can be enjoyed in many provinces of Isan including Kalasin, Roi Et, and Yasothon with festivities in Yasothon and Kalasin being among the largest and most well-known of them all. There is also a rocket festival in Sukhirin district in the Southern province of Narathiwat initiated by the people who moved south from Isan. And with the event having been cancelled in 2020 and 2021, this year it is making a much-anticipated return.

Over the three-day event, there are celebrations and activities to enjoy, in addition to the actual launching of the rockets. This includes colourful rocket processions of floats and folk dancing, merit-making ceremonies, a rocket team cheering contest, light and sound show, and Bung Fai parade contest.

A tradition of the ethnic Phu Thai Kutwa people, the celebrations in Kalasin stand out as many of the rockets are launched as part of huge cartwheel-like structures up to six metres in diameter. This year, in addition to the launching of 50 ‘Bung Fai Talai Saen’ (120 kg) rockets and two ‘Bang Fai Tai Lan’ (1,200 kg) rockets, other celebrations include colourful rocket processions of floats and folk dancing, a merit-making ceremony, and activities showcasing the traditions of the ethnic Phu Thai Kutwa people.