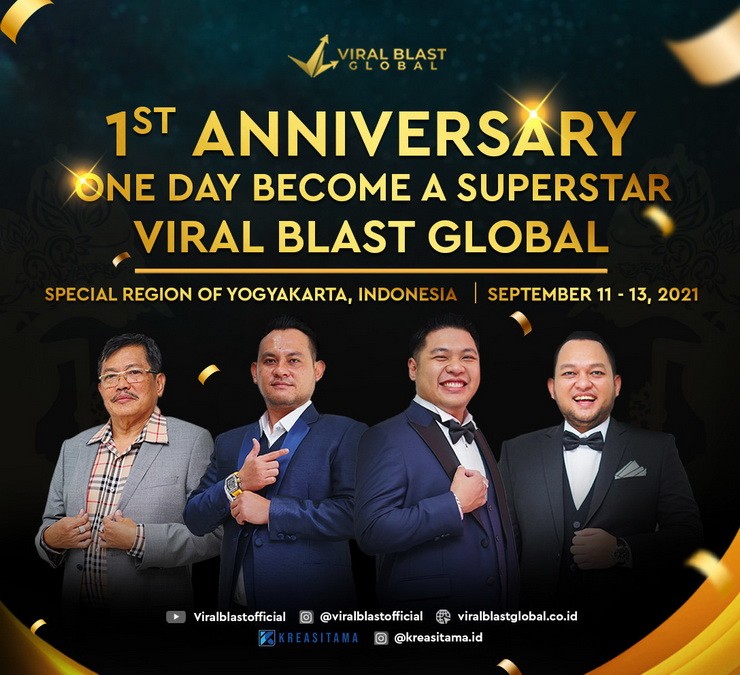 The event with the theme "One Day Become a Superstar" brought together hundreds of Viral Blast Global partners from all over Indonesia.

Yogyakarta, Indonesia - Through the Ministry of Tourism and Creative Economy, the Indonesian government is promoting Indonesia's tourism potential. One of the efforts is to promote 5 super-priority destinations in Indonesia. This has received a positive response from the Viral Blast Global Money Management Education Platform. On the Company's first anniversary, Viral Blast Global under PT Trust Global Karya held an event in the Special Region of Yogyakarta Province, one of Indonesia's favourite tourist destinations.

The event with the theme "One Day Become a Superstar" brought together hundreds of Viral Blast Global partners from all over Indonesia. It also presents Zainal Hudha Purnama, Rizky Puguh Wibowo, and Putra Wibowo as the Owner of Viral Blast Global. Besides, Minggus Umboh as a financial consultant will also be present at the event, which will be held from September 11-13, 2021.

Not only holding an internal company event, as a form of support for the Indonesian Creative Economy and Tourism Sector, PT Trust Global Karya, through the Viral Blast Global Brand, invites all partners and management to visit the Sabdodadi independent cultural Village. As information, on December 7, 2020, has been designated as one of the independent cultural villages in 2020 by the Governor of Yogyakarta Special Region, Indonesia

Zainal Hudha Purnama as the Owner of Viral Blast Global stated that one of his Company's visions is to always support national economic growth in Indonesia. According to him, the creative economy and tourism sectors are one of the pillars that must be a priority.

"Our support must be started from the bottom, which is the village community. This time Viral Blast Global wants to introduce Sabdodadi cultural independent village to the world community through the promotion on the New York Town Square in the United States of America. We want the world to acknowledge one of the potentials of the Special Region of Yogyakarta, namely Sabdodadi Cultural Independent Village, which there are efforts to be involved in the context of actualizing, developing, and conservating the wealth of its artistic potential, which includes traditional activities, arts, traditional games, languages, literature, literacy, crafts, culinary, medicine traditional, spatial planning and cultural heritage," he said.

Visitation to the Sabdodadi Cultural Independent Village will also be filled with a Talkshow Forum Update broadcast on the local TV station Jawa Pos TV. The talk show that will discuss the Creative Economy and Tourism sector will present the Minister of Tourism and Creative Economy Sandiaga Uno, the Governor of the Special Region of Yogyakarta Sri Sultan Hamengku Buwono X, and the Regent of Bantul Regency Abdul Halim Muslih.

Sabdodadi Village, before being designated as an Independent Cultural Village, already had an international class branding or label. The Manding Tourism Area offers a variety of handicrafts made from leather, whose name has soared everywhere.

The existence of the Tourism Awareness Group (Pokdarwis) in the Manding area has contributed to the development and progress of the Manding site. Manding has become a shopping tourism area in the district of Bantul, the Province of the Special Region of Yogyakarta, Indonesia. This area has significantly increased the economic impact on Sabdodadi Village.